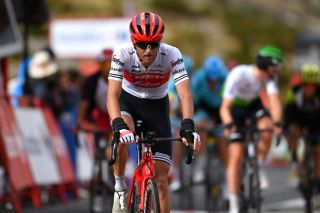 Peter Stetina confirmed that the Tour of Guangxi will be his last race with Trek-Segafredo, ending a four-year association with the team. The American was coy about his future, stating that he's not announcing his plans for 2020 just yet.

This time last year, Stetina was in a similar position, with his contract renewal with Trek not announced until the end of October. But, a year on, he seemed relaxed about his future, which has already been decided.

"Yeah, I'll be leaving Trek," Stetina told Cyclingnews at the start of stage 2 in Beihai.

"I'm not quite ready to announce what it'll be yet. You'll see and hear about me next year, but it will not be in the Trek-Segafredo colours.

"I would think that I'll announce it by the end of October."

Stetina: I'm stoked to go back to the Vuelta a Espana

Stetina: I was literally googling how to start a new job with no college degree

Despite the long year of racing from Australia in January to China in October, Stetina has enjoyed the ride, noting that 2019 has been one of the most fun years he has spent in Trek colours.

As well as a full road programme of 10 WorldTour races, including the Vuelta a España, the ex-mountain biker has hit the dirt once again this year. Stetina has headed back to the USA twice for gravel races, joining a growing trend among pro riders. In June, he took second at Dirty Kanza, while two months later he finished fourth at the Leadville 100.

"It's been a really fun year, you know," he said. "I've had more fun this year than I've had the last few years, for sure. Just having a nice level, a good fitness all year, doing some of those adventure races, having a good Vuelta. Yeah, it's been a nice season.

"Gravel is kind of the new excitement in the US scene. I grew up on the mountain bike, and I've always ridden off-road for a bit of training and in the off-season, so it's been quite an easy choice for me to hop into those and just experience the community of cycling."

The fun hasn't extended across Stetina's team in 2019, though. The team languishes near the bottom of the WorldTour win rankings, with 10 to their name, just ahead of Team Sunweb in last place.

While Giulio Ciccone's Giro d'Italia stage win had been the bright spot of the season for much of the year, Bauke Mollema's Il Lombardia win last week, aided in part by Stetina, gave the team the big win they needed late on in the year.

"We've all turned it around," Stetina said. "We've been fighting all year and bashing our heads against the wall, but sometimes you just need that momentum and that motivation to click, so yeah, it's been really good."

There's possibly more success on the horizon in Guangxi, too, with Matteo Moschetti and John Degenkolb mixing it up at the front of the sprints on the opening two stages. With three more sprint stages to come, there could be a win on the cards, and Stetina just might have a go on stage 4's hilltop finish, too.

"We'll see," he said. "There's actually a surprisingly high amount of GC riders here, and less of a sprint-heavy field, which is abnormal considering there's so many sprint days.

"But yeah, that's the only thing I can do here, so I'll have a look at the mountain stage and see where we stack up. At the same time, I'm just really enjoying racing all over the world, but it's also been a long season so I'm just trying to squeeze those last drops out of the system."