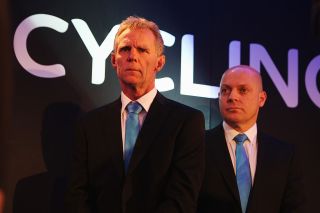 After walking out of the Medical Practitioners Tribunal on Tuesday, former British Cycling and Team Sky coach Shane Sutton painted himself as the victim of bullying by Richard Freeman's counsel Mary O'Rourke in an interview with the BBC's Dan Roan.

Sutton was called to testify in the tribunal after Freeman admitted to lying about an order of banned testosterone sachets after documents were uncovered in the UK Anti-Doping investigation showed it had been received by him at British Cycling headquarters. Freeman is accused of 22 different offenses by the General Medical Council (GMC) relating to the order of banned substances, poor clinical procedure and record keeping. He denies only four of the counts, all relating to his motivation to place the order.

Freeman has accused Sutton of bullying him into placing the order, purportedly to treat Australian's erectile dysfunction, but in Tuesday's hearing Sutton vigorously denied having any such issues and insisted he had nothing to do with the order of 30 sachets of Testogel.

In trying to question Sutton's character, O'Rourke said she had several witnesses come forward in the last few weeks to say Sutton is "a liar, a doper and a bully".

The exchange led to Sutton storming angrily out of the hearing and refusing to return. He told the BBC he would discuss his testimony with his family before deciding if he would return on Thursday.

Review into British Cycling upholds claims over 'culture of fear'

"I want to go away and reflect on what's been said and consider coming back on Thursday, and defend any allegations regarding the case," Sutton said. "It's pretty disappointing the way I've been singled out and I feel I'm on trial. I need to go talk to my family and discuss whether I return to give any more evidence. End of the day, I know full well I never made that order and therefore that's what I'll go back in on Thursday and continue to repeat if I return."

Sutton resigned from British Cycling in April, 2016 after being accused of sexism and bullying by track cyclist Jess Varnish. British Cycling's independent review of the federation's culture concluded that there was 'a culture of fear', 'dysfunctional leadership structure', and that the investigation into Jess Varnish's claims of sexism against Shane Sutton was 'inept.'

The report stopped short of upholding bullying accusations, but was critical of the amount of power Sutton had in the high performance program despite not having the necessary skills for the role of technical director, leaving fellow staff members and athletes demoralised.

After being confronted by O'Rourke, who described him as a 'serial liar' and 'doper', Sutton stormed out. On the street, he told the BBC "It's obvious that this is an individual who doesn't know me trying to discredit me," of O'Rourke. "She doesn't know me as I said in there. It's quite upsetting she can make accusations - and as you will all be aware there was nothing evidence based in there. It's quite sad to think my 12-year-old son sees Dad being accused as a bully when actually this lady's become the bully."

"I'm disappointed...I've been singled out & feel like I'm the one on trial!" Ex British Cycling & Team Sky head coach Shane Sutton talks to the media after key witness sensationally storms out of medical tribunal having been called 'a doper and liar' by Dr Freeman's lawyer pic.twitter.com/TRM4RUMppvNovember 12, 2019

I asked Sutton why he thinks Dr Freeman ordered the testosterone to the sport’s HQ in 2011, if it wasn’t for him to treat his alleged erectile dysfunction (as claimed by Freeman). Here’s what he said: pic.twitter.com/lh3RcgF0ASNovember 12, 2019