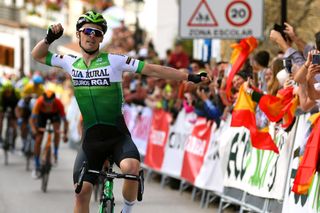 On a blisteringly fast run-in to the final climb on stage 2 of the Vuelta a Andalucia Ruta del Sol to Iznajar the WorldTour riders were amassed at the head of the peloton as they reached the base of the 1.3km-long 7.2 per cent gradient that stood between them and the finish line. Antonio Pedrero (Movistar) was the first to jump but when Caja Rural-Seguros RGA's Gonzalo Serrano leapt across to him, Pedrero sat up.

After Serrano, hands in the drops, sprinted all out up the steep lower slopes opening up an ever increasing gap to the bunch with race leader Jakob Fuglsang (Astana), Pedrero might have regretted that decision but one can understand why the Movistar rider might have underestimated the 25-year-old from Madrid: on stage 2 of the Vuelta a la Comunitat Valenciana two weeks ago, Serrano tried a similar attack only to be mowed down by the favourites before Tadej Pogačar (UAE Team Emirates) went on to seal the win.

Thursday, however, Serrano found the right combination of terrain in his favour and hesitation in the peloton behind. He came across the line with plenty of time to savour his victory as Juan José Lobato (Fundacion Orbea) and Dylan Teuns (Bahrain McLaren) sprinted for second behind him.

"It was a day that suited me very well," Serrano said in a team press release. "Yesterday I tried to keep my strength thinking about today's stage, since it was the route that best suited my characteristics and we had studied it in detail. Normally it does not come out but today luckily we have finished it off perfectly."

The peloton caught the day's breakaway on the Puerto de la Parrilla, a 8.8km-long category 3 climb that topped out with about 12km to go and then another attack formed with UAE's Brandon McNulty and Stefano Oldani (Lotto Soudal) but the high speeds of the descent to the causeway leading to Iznajar sealed the duo's fate.

Serrano positioned himself well on the approach to the climb before rocketing out of the pack and on to the first win of his career.

"I think I'm not aware yet, I don't believe it," Serrano said. "My first victory as a professional and in a race of the level of Andalusia. It is difficult to take it in. Right now, both the team and myself, we are going very well and the goal is to keep chasing more."