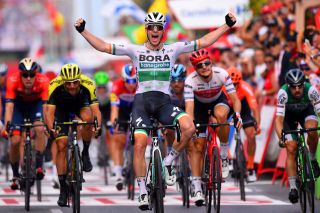 Sam Bennett's future looks a step closer to being resolved, with Deceuninck-QuickStep reportedly closing in on signing the Bora-Hansgrohe sprinter after a drawn-out transfer saga.

The Irishman is the last major name still remaining on the transfer market for 2020, and he looked set to leave to Bora-Hansgrohe until reports emerged that he had signed an offer letter with the German team back in May.

Despite that, Bennett still sought to leave the team at the end of 2019, prompting a UCI arbitration panel to step in and decide the rider's future. According to reports from Het Laatste Nieuws, the impasse has finally been broken, with the Belgian team set to get their man once Bora-Hansgrohe and Bennett finalise their split.

Vuelta a España: Sam Bennett uncertain of stage 14 victory until after the line

"It's moving. In a positive sense," Deceuninck-QuickStep boss Patrick Lefevere told the Belgian newspaper. "Of course, you're only certain when you have a signed contract in your hands, but yes [the saga] is about to finish. That's a good thing, because the business has been dragging on for so long now.

"I suspect that they will have waited as long as possible at Bora-Hansgrohe, to make Bennett nervous so that he would pay [to break the agreement]. But in the end, they realised that you can't do much with a rider you want to keep against his will. So, I'm in happy expectation."

Bennett's agent, Andrew McQuaid told Cyclingnews via text on Wednesday morning that 'nothing [is] finalised yet.'

Last week, Lefevere told Cyclingnews that he was still waiting on the issue to be resolved, and that Bora had offered him a trade deal for Colombian sprinter Álvaro Hodeg.

Bennett sought to leave Bora after being snubbed for selection in both the Giro d'Italia and the Tour de France this year. He went on to rack up 13 victories this season regardless, including 11 at WorldTour level and two at the Vuelta a España.

Replacing Elia Viviani at the Belgian team, he'll reportedly be accompanied in the move by lead-out man Shane Archbold, who rejoined Bora in April, signing on for the rest of 2019.

"[It's] excellent news," Lefevere told Het Laatste Nieuws. "Of course, we have two strong sprinters with Fabio Jakobsen and Hodeg, but they are still young. And with 285 days of competition per year, it's not a luxury to have three sprinters in the team.

"I thought it was a shame, the whole impasse. For me, as a third party who watched helplessly, but especially for [Bennett]. 'I have had posters from the team and my idol Tom Boonen since I was 12 years old,' he told me. 'This is my dream team', and he couldn't come here."