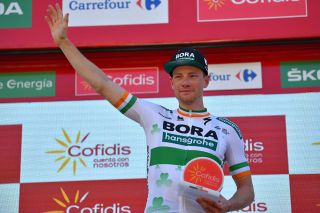 The first moment that Sam Bennett (Bora-Hansgrohe) knew he had taken his second stage of the 2019 Vuelta a España came when he saw the team soigneurs celebrating as he eased to a halt after the stage 14 finish line in Oviedo.

More than a sprint, with the peloton mauled by the late crash, Bennett had to make a lengthy late charge for the line to succeed.

When he reached the finish in central Oviedo, the reigning Irish road champion said later that he wasn’t certain if the breakaway of the day had managed to stay away.

“I was afraid to celebrate because I wasn’t really on the front until 6 or 5 ks to go,” Bennett, already the winner of the Vuelta’s stage three, said afterwards.

“I didn’t know whether to celebrate or not, I’ve made that mistake in the past, and it’s so embarrassing.”

Bennett also expressed his hopes that the victims of the mass crash in the final kilometre were doing OK. He and the front 20 or 30 riders had luckily managed to avoid the accident.

“I heard a crash, but it was behind, then QuickStep came fully organised and ready for the sprint, and also UAE were there, it didn’t really affect the front of the bunch,” he said.

Victorious on stage 3 and then defeated by Deceuninck-QuickStep’s Fabio Jakobsen on stage 4, Bennett’s mini breakaway to his fifth Grand Tour stage victory had come after Bora-Hansgrohe had done what he called a “fantastic job” of keeping him in the front.

“We started slowing down on the steepest part of the final and one guy [Tosh Van De Sande of Lotto-Soudal - ed.] came past at speed and I didn’t want to wait too long,” Bennett recalled.

“[Max] Richeze went, and I was afraid the other guy was going too fast, so I just I took a run at the two of them and had good speed in the end. When I saw there were 300 metres to go, thought ‘oh it’s too far’, but I had enough power.”

Although he has had one-day race victories, most of Bennett’s wins to date have been in stage races. But his mini breakaway to the finish of the Vuelta’s stage 14 could fuel speculation that he will maybe transfer his skills to more challenging Classics in the future.

“I’ve been told in the past I don’t have the capacity to be a pure sprinter and I should be more of a Classics rider because I have a high VO2 max and a bigger engine than I do the sprint,” Bennett said.

“But I just want to be a sprinter, so I probably force myself to be something that I’m not. Maybe I shouldn’t really be a sprinter, but I don’t care because I can get the results.”

In the short-term, Bennett said, he felt a considerable amount of pressure in the Vuelta to succeed because there are so few opportunities in the Spanish Grand Tour.

“I have to wait so long to get a sprint [stage], you ride around for 11 days feeling pretty useless and so then when it comes to a sprint you have to perform,” he reflected. But when the opportunity finally came around on stage 14 of the Vuelta, Bennett indeed showed he knew how to take it.