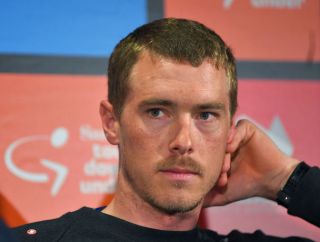 Rohan Dennis has deleted his social media accounts after apparently posting a photo of himself breaking lockdown measures in Spain.

Earlier in the day, according to screenshots captured by Instagram users, Dennis posted of the view from the driver's seat of his car, with the location marked as Girona, where he lives in north east Spain.

The caption read: "Day 34 - cracked and left the house. #covid19 can suck my ass and so can #quarantine."

Team Ineos declined to comment when contacted by Cyclingnews.

When one Instagram follower suggested he shouldn't have posted the picture publicly, Dennis replied: "Or I could show the reality of how shit the situation is and not be one of your beloved drones who show their 'perfect world' as an elite athlete. Which one would you like - real or fake?"

When another suggested he would have to later apologise for his post, he replied: "Imagine if everyone lived by your ideal world that we can't speak our mind and show our emotions."

Spain is one of the countries worst affected by the novel coronavirus pandemic, with more than 20,000 deaths. Lockdown measures are among the strictest in the world, with people not even allowed out of their homes to exercise.

Dennis has been training indoors and last week won a virtual Team Ineos race on the online platform Zwift.

This is not the first time Dennis has withdrawn from social media. In the aftermath of his sudden exit from last year's Tour de France, he did the same, later revealing it was in the interests of his mental health to try and avoid the backlash.

I think it is safe to say that Rohan Dennis is not coping well at the moment. pic.twitter.com/Kx2b1Npb11April 18, 2020