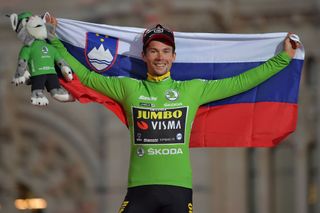 The last piece of a Grand Tour jigsaw fell into place for Primož Roglič (Jumbo-Visma) on Sunday evening as the Slovenian came through a final, largely ceremonial, stage into Madrid with no last-minute upsets to trouble him en route to overall victory.

75th on a stage won in a bunch sprint by Fabio Jakobsen (Deceuninck-QuickStep), Roglic's victory in the Vuelta a España comes after a third place in the Giro d'Italia this spring, and in a season in which he has also taken the UAE Tour, Tirreno-Adriatico and the Tour de Romandie.

Jakobsen makes it five for Deceuninck-QuickStep at Vuelta a España

Roglič also won the Vuelta's points competition, easily out-powering his compatriot Tadej Pogačar (UAE Team Emirates) with a total of 155 points to Pogacar's 136. Pogacar finished third on the final podium behind Roglič and Alejandro Valverde (Movistar), making it an even more exceptional Vuelta a España for Slovenian cycling.

In the top spot overall after his sole stage victory, the time trial in Pau on stage 10, Roglič looked unusually cheerful as he sprang up onto the final podium on Sunday evening in Madrid to claim his final Vuelta a España leader's jersey.

Slovenian and Colombian flags waved amongst the large crowds in Madrid's central Plaza de Cibeles square in what proved, after major storms and flooding across large parts of the country, to be unexpectedly dry and warm early autumn weather.

Roglič responded by repeatedly smiling and giving double thumbs to the fans, as well as draping himself in a Slovenian flag when he received the points classification.

His final winner's speech on the podium, wearing the leader's jersey and with the points jersey folded up and jammed underneath, was in line with the minimalist brevity of his press conferences, with the Slovenian limiting himself to giving thanks for the people who had helped him in his career, and saying he would see them all in future races.

Roglič's landmark achievement makes him the first Slovenian to win a Grand Tour, in a year in which Ecuador has also taken its first Grand Tour victory with Richard Carapaz in the Giro d'Italia, whilst Egan Bernal has won Colombia's first Tour de France.