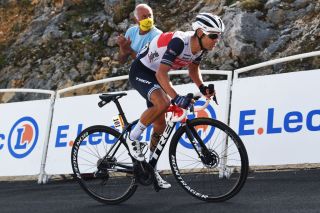 Trek-Segafredo’s Richie Porte rode to third place on stage 15, which finished on the Grand Colombier, and moved the Australian climber up to sixth overall at the 2020 Tour de France (Image credit: Getty Images Sport)

Richie Porte (Trek-Segafredo) put in what was arguably his best performance yet at this year's Tour de France to finish within touching distance of stage winner Tadej Pogacar (UAE Team Emirates) and race leader Primoz Roglic (Jumbo Visma) on stage 15 of the race on Sunday.

Porte finished third on the summit finish of the Grand Colombier, a handful of seconds behind the Slovenian riders, and, after having dropped the rest of the GC contenders, the Australian is up to sixth on the GC, and is 2:13 off the yellow jersey ahead of Monday's second and final rest day.

On stage 15, Porte had to hang in when Jumbo-Visma set a relentless pace on the final two climbs. Both defending Tour champion Egan Bernal (Ineos Grenadiers) and Arkéa-Samsic's Nairo Quintana fell by the wayside, but Porte and the rest of the GC contenders remained in the hunt until the final 500 metres, when Roglic opened hostilities. Porte was able to respond to the first acceleration, but the final kick to the line saw gaps begin to open up.

"It was nice to be able to sit on the wheels of Jumbo-Visma on the final climb, and I felt pretty comfortable. The pace was pretty high and when Adam Yates [Mitchelton-Scott] attacked, they never really struggled. I think they lost George Bennett, but that was it," Porte said at the finish.

"I knew the climb from doing the Tour de l'Ain, where I attacked with two kilometres to go, not really knowing the finish, so today my plan was always to sit in as long as I could. When I got to 500 metres to go, and Roglic attacked, I had to go to the front and do my pace. I'm never going to beat guys like Pogacar and Roglic on a finish like that; sometimes it works, sometimes it doesn't, but it was good to put time into some other GC guys," he said.

"We knew this stage pretty well from the Tour de l'Ain, so we knew what we were dealing with. The big guys did a great job looking after me for the first 100 kilometres, and Mads [Pedersen] and Jasper [Stuyven] put me in a perfect position for the first climb. And then I had Kenny [Elissonde] there with me. It was a good day for the team."

The result puts the shine back on Trek's Tour after Bauke Mollema crashed out of the race on stage 13, and Porte's credentials as a possible podium finisher in Paris grow better by the day. There is still a difficult final week in the Alps to come, but other than stage 7, when Porte lost time in the crosswinds, the 35-year-old has been almost faultless in what he has already stressed will be his final Tour de France as a leader.

"Jumbo-Visma had a good pace, and it was hard to do much off that pace," he said. "At the end of the day, you almost have to look at them as your teammates when they're that strong to control. But I'm happy for today, and I'm motivated for the last week of the Tour. Now I'm looking forward to the rest day, and recovering a bit, and hopefully having a good last week of the Tour."