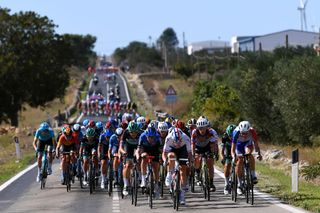 Peloton in the echelons during flat and fast stage 7 at 2020 Giro d'Italia (Image credit: Getty Images)

A savagely fast and furious stage 7 of the 2020 Giro d’Italia saw the entire 143-kilometre day of racing between Matera and Brindisi hit a record-breaking average speed of 51.234 kph.

Held entirely on the flatlands of deepest south-eastern Italy and without a single classified climb, things got off to a blisteringly fast 55 kph average for the first hour as multiple echelons shattered the peloton.

There was a brief respite from the battle as the peloton hammered mid-stage through the streets of Taranto. But then for a full two hours, most of it on a pancake-flat dual carriageway, or SuperStrada, running through exposed wheat and olive fields and few towns, yet more echelons, crashes and an almost equally high pace blasted the peloton all the way to the finish to the marshy Adriatic coast in Brindisi.

Even though it was not as windy as had been feared or forecast, Trek-Segafredo leader Vincenzo Nibali confirmed that it had been molto veloce, and molto nervoso - ultra-fast and fraught - throughout the day.

“It was a bit windy at first, but I didn’t think a situation like that would arise, all of us lined out on the right-hand side of the road. I saw a bit of movement in the peloton, and on instinct, I got up there, and saw Deceuninck-QuickStep were up to something, forming an echelon," the Trek-Segafredo rider said.

“I got in the front group with [Jacopo] Mosca, there were lots of 90-degree changes of direction in the road, you had to be up front and alert. I’m just pleased we got through it OK.”

Other teams confirmed that from kilometre zero, or even before that, this had been a stage where riders were clinging onto the front groups by the skin of their teeth.

“It was a really fast stage,” confirmed British National Champion Ben Swift (Ineos Grenadiers) afterwards, “We knew it was going to stressful and there was the danger from the wind, everybody knew that.

“But our time for signing on was one of the last, so we got to the start line right at the back, and with everybody knowing that was going to be at the start, it was impossible to move up.

“That’s one lesson to learn from the future, we missed that first split. But we knew we was always going to come back, but we were never in any danger. After that it was all about riding in the wind and looking after Tao [Geoghegan Hart], and that’s why I was in a good position at the end,”added Swift, who netted an unexpected fourth place in Brindisi, one which he says is encouraging for his options in the tougher sprint days to come.

While Swift found himself able to grab an unexpected opportunity, GC contenders like Nibali and Jakob Fuglsang (Astana Pro Team) found the stage became one to get through.

“It was a busy day, we got left out a little bit at the beginning, but later we managed to get back to the front group and were able to stay at the front for the rest of the stage,” Fuglsang recounted. “I had a small crash but nothing serious. All in all, I am satisfied how the day went, on days like today you can lose a lot and not really gain much."

“All the teams were extremely focused because they were aware there could be upsets in the GC if they were caught off guard in the crosswinds,” Bora-Hansgrohe directeur Jan Valach said in a press release.

“As a result, there was a lot of tension in the peloton. In the first 70km of the stage we faced winds close to 30 km/h, the first splits were formed quite early and at some points, there were up to five groups. Peter Sagan was in the first and Rafał Majka in the second but was able to come back.”

Sagan himself took second place on a stage for a third time in this year’s race, but he said that after such a difficult day, the bunch sprint was nothing if not “chaotic.”

"It was a very fast stage, very nervous as well and marked by many crashes. The guys did, once again, an excellent job today, and we were very well positioned for the sprint, which was a chaotic one. I was close to the victory but it just wasn’t the day today,” said Sagan.

For record-breaking speeds, though, stage 7 of the 2020 Giro d’Italia was the ONLY day that counted.