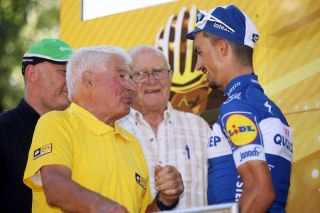 Tour de France legend Raymond Poulidor's family is extremely worried about his health after the 83-year-old was hospitalised two weeks ago.

Poulidor – nicknamed 'The Eternal Second', due to him having finished second at the Tour three times, and third five times – was at first thought to be suffering from fatigue following another Tour de France, where he works each year as an ambassador for yellow-jersey sponsor Crédit Lyonnais. The Frenchman can be seen at the start village each morning, chatting to friends, fans, journalists and well-wishers, with a hint of irony in that he never actually wore the yellow jersey himself.

Poulidor sees reminders of Anquetil rivalry in Pinot and Bardet

However, Poulidor's wife, Gisèle, has told leparisien.fr that her husband's health has deteriorated in recent days.

"The news isn't good," she told the French newspaper on Wednesday from the hospital close to their home in Saint-Léonard-de-Noblat, near Limoges. "The doctors have told us that they're going to do some more tests, but that we shouldn't expect good news.

"For some days now, he's said almost nothing. He just responds 'yes' or 'no' when asked if he's eaten or slept. I am, of course, very worried," she said.

Poulidor turned professional in 1960, and rode his entire pro career for the French Mercier team in its various guises, retiring in 1977 having finished third in his final Tour de France – behind Lucien Van Impe and Joop Zoetemelk – in 1976 at the age of 40.

Poulidor finished second again at the following year's Tour, behind Italy's Felice Gimondi, and was runner-up once more in 1975 behind Merckx, who had turned professional in 1965.