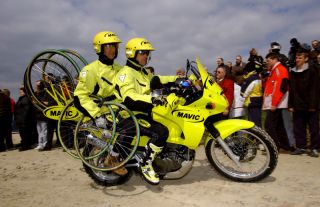 Troubled bicycle wheel manufacturer Mavic may have a saviour in the form of business lawyer Didier Poulmaire, who is heading up a takeover project which includes a group of industry experts and two former professional riders.

Mavic, which was created in 1889 and employs 250 people worldwide, was placed into receivership earlier this month after apparently being sold to Californian investment fund Regent LP.

The company was previously owned by Salomon, which was in turn owned by Amer Sports, a Finnish sporting goods conglomerate which had been sold on to Chinese company Anta Sports.

A report from French newspaper L'Equipe named Poulmaire as a prospective bidder in the tender process, set to run until June 2. The Frenchman played a major part in American businessman Frank McCourt's takeover of football club Olympique de Marseille in 2016.

"The idea is to finalise a project that will help save the jobs and the genius of the men and women who made the 'yellow blood," said Poulmaire. "The consultation process is well underway and a big name in the French economy should be added, for whom several options are being studied.

"The difficulties encountered by Mavic are, for me, an opportunity to mobilise economic players who intend to actively participate in the famous 'world after [COVID-19]' that we've heard a lot about recently."

Poulaire espoused the model of 'economic patriotism', calling an action to rescue the company "saving the Mavic soldier" and naming it one of "the players of world sports that will allow France to shine at the 2024 Olympic Games in Paris."

The makeup of the takeover group hasn't been made public, but it includes "a small group of experts in bicycle manufacturing, distribution, events and marketing sector, plus two renowned former professional riders" according to Poulaire.

Report of the potential takeover from a France-based group of investors will no doubt be good news to Mavic's staff, 200 of whom work in the country. The company's complicated ownership situation remains unresolved.

Mavic's Social and Economic Committee (CSE), which represents the company's employees, said earlier this month that the sale to Regent LP had not taken place, with Mavic instead owned by a Delaware-based company called M Sports.

"Even worse, since its sale by Salomon, Mavic has been incomprehensibly abandoned and has never really been taken over, neither by Regent LP, nor by M Sports," read the statement from the CSE.

"Why did we have to wait several months before the receivership was finally opened? Isn’t it too late to find a serious buyer? What has happened in the meantime? Absolutely nothing!"