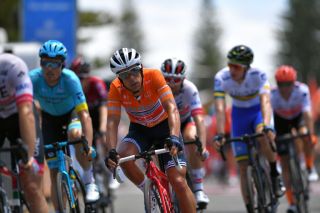 Richie Porte surrendered the overall lead at the 2020 Tour Down Under on stage 5 (Image credit: Bettini Photos)

Richie Porte (Trek-Segafredo) lost the overall lead at the Tour Down Under to rival Daryl Impey (Mitchelton-Scott) on stage 5 to Victor Harbor on Saturday, but the cards fell in the Tasmanian's favour in the hectic finale, with Impey only 10th in the 55-rider sprint finish, and so failing to pick-up any of the 10, six and four-second bonus seconds.

Trek-Segafredo did what they could to limit Impey's attempts to sweep up bonus seconds during the stage and build a significant lead, with road race world champion Mads Pedersen duelling with the Mitchelton-Scott rider at the day's two intermediate sprints. However, Impey nevertheless managed to pick up five bonus seconds, leaving Porte now just two seconds behind the South African overall.

Overall victory is, in theory, within reach for Porte on the final uphill finish to Willunga Hill on Sunday.

Porte has won on Willunga Hill for the last six years, and knows exactly the effort he needs to produce to win a seventh. If Porte wins the stage, he will collect the 10-second time bonus plus any time he can put into Impey and his other rivals, and the title will be his. Any other result will make it considerably closer, but he knows he has to pull back those two seconds and take at least another second to secure overall victory.

"Tomorrow, it's all to play for. If we can win the stage, we can win the race. It's not a massive deficit for tomorrow, but it will be hard," Porte said, slightly despondent after the stage after perhaps hoping to do better, and ignoring how things could have been much worse if the 11-rider group of overall contenders that went clear on the late climb had stayed away and Impey had taken further bonus seconds on the finish line.

"We expected that Mitchelton was going to do that," Porte said of the attack on Kerby Hill with 20km to go, which left him alone with three Mitchelton-Scott riders – Impey, Simon Yates and Lucas Hamilton – and three from Team Ineos, including Rohan Dennis.

Porte didn't appear happy with the performance of his Trek-Segafredo teammates. Neo-pros Michel Ries and Juan Pedro Lopez have ridden well this week but finished in the second group in Victor Harbor.

"Mads did a good job to take some seconds early on, but I was a little isolated today, so hopefully tomorrow the boys are on again," Porte said.

Pedersen won the most-aggressive rider prize, even going on the attack after contesting the time bonuses in the hope of being up the road for Porte after the late climb.

"I think we did an OK job," the 24-year-old Dane said. "My first job was to do the sprints and I tried to beat Impey. I did it in the first one but he was too strong in the second sprint. Then we saw the gap to go in the break, and so I went across to it with the idea of riding over the climb up front, so that I could have been there in the finale.

"That didn't work out, but it was worth trying," said Pedersen. "It's only two seconds between Richie and Impey, and Richie usually does well on Willunga. If he wins, he'll win the GC, too."