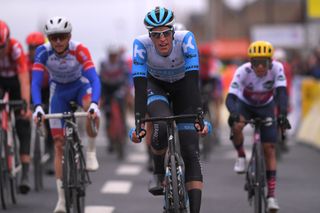 Nils Politt will leave Israel Start-Up Nation at the end of this season to join Bora-Hansgrohe. The German has signed a three-year contract that will keep him at his new team until the end of 2023.

“I'm really very happy. In a way, it’s like being reunited with my friends from the early days, and that made the decision quite easy for me,” Politt said in a statement on Monday.

“I've known several of the riders in the team for a number of years and I'm looking forward to racing with them.”

Buchmann: Winning the Tour de France is not impossible

The 26-year-old Politt had previously spent four years in the colours of Katusha. lone professional win was a stage of the Deutschland Tour in 2018, but he has consistently impressed in the cobbled Classics in recent seasons, most notably at Paris-Roubaix in 2019, where he placed second behind Philippe Gilbert, losing out in a two-up sprint on the velodrome.

In 2021, Politt will join a one-day racing unit that already features Peter Sagan, Daniel Oss and Max Schachmann, who will test himself on the cobbles this October.

“For the Classics, we’ll have an enormously strong team next year, and that's also a new situation for me,” Politt said. “Over the past few years, I have been more of a lone warrior, so to speak, in those races. Tactically, this will definitely provide us with a vast array of opportunities.”

Bora-Hansgrohe manager Ralph Denk welcomed the arrival of the Cologne native, though he stressed that the German team retained an international outlook.

“It’s great that this has finally worked out. We have been interested in Nils previously, that's certainly no secret,” Denk said. “As a German top team, we’d of course like to have all the top German riders under contract, but we are still looking for international talent. Our goal is not to become a German national team, but rather to win the WorldTour.”

Bora-Hansgrohe have won six races since the professional cycling season resumed following the hiatus due to the COVID-19 pandemic. The squad dominated the Sibiu Tour in Romania, picking up four stages and overall victory, while Felix Großschartner won the opening stage of the Vuelta a Burgos.

Schachmann, who recently signed a four-year contract extension with Bora-Hansgrohe, placed second in Saturday’s Strade Bianche, and he will form part of a strong Tour de France selection, where Emanuel Buchmann will lead the team’s tilt at the general classification.