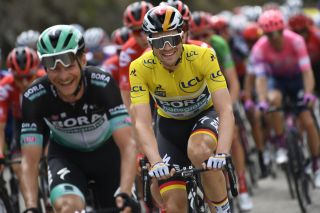 Max Schachmann has signed a four-year contract extension with Bora-Hansgrohe that will keep at the team until the end of the 2024 season as the German team plans for the long-term, possible post-Peter Sagan future.

In June, Schachmann confirmed that he was in talks with multiple teams, but he has opted to remain at Bora-Hansgrohe on a long-term deal.

“I’ve been able to progress very well within this team and feel very much at home here,” Schachmann said in a statement released by the team on Wednesday.

“So it goes without saying that I’m looking forward to our future together and also to the trust that has been placed in me with this new long-term contract. At the moment, I am quite versatile as a rider, and we want to find out together over the coming few years in which races I have the greatest potential. That will be an exciting endeavour, and at Bora-Hansgrohe, I feel that I will be perfectly supported on this journey.”

Buchmann: Winning the Tour de France is not impossible


The German champion arrived at Bora-Hansgrohe in 2019 after a successful stint at QuickStep. He enjoyed a fine debut season with the team, winning three stages at the Tour of the Basque Country and placing third at Liège-Bastogne-Liège.

Schachmann carried that form into 2020, placing second overall at the Volta ao Algarve before winning Paris-Nice, which was the final WorldTour race before the season was interrupted by the COVID-19 coronavirus pandemic.

The 26-year-old is due to resume his 2020 season at Strade Bianche on Saturday. He is also expected to ride the Tour de Pologne and Il Lombardia ahead of the rescheduled Tour de France, where he will ride in support of Emanuel Buchmann’s tilt at overall victory. Schachmann is slated to compete at both the Ardennes and cobbled Classics in October.

“I have always said that with Max, we’re planning for the long term. He’s a perfect fit for us and I think he sees it the same way,” Denk said.

“With his overall win at Paris-Nice, he has also established himself as a stage racer. It remains to be seen how far he can be developed further along this path, but Max definitely has a number of other qualities. We want to help him find his place over the next coming years.”

Benedetti has been with the team since its inception as NetApp in 2010, and the Italian won a stage of the Giro d’Italia last year. Pöstlberger has been at the team since 2016 and won the opening stage of the following year’s Giro. The Austrian has played a vital role in the team’s sprint train in recent seasons.

“Lukas is also a complete rider. He’s able to support a sprint train on flat terrain or in echelons, but is also very strong on medium mountain stages. That makes him very valuable as a team player,” said Denk, who described Benedetti as “a real pillar of strength.”