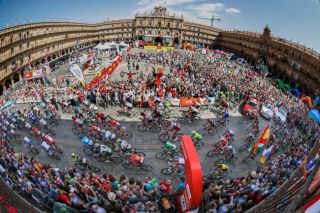 The Vuelta a España boss has told Cyclingnews that plans to bring the race to Yorkshire have not progressed in recent months.

With the Spanish Grand Tour set to start in the Netherlands next year, Javier Guillén has said that the brief discussions that he held with Welcome to Yorkshire have been put on ice. However, the Vuelta boss is still keen on one day bringing the race to the region.

"I can only confirm that we have a very good relationship with Welcome to Yorkshire. I've been there many times. It's hard to say when we could be there. There's a possibility in five years, ten years, but that's just speculation. There's been contact but nothing else," Guillén said at the Rouleur Classic on Thursday evening.

"We depart from the Netherlands in 2020 and we use Friday and when you do that you're extending the race by one day. You can only do that once every four years, so that's why I don't see the Vuelta being in Yorkshire for the next four years."

When asked if discussions had moved on since earlier this year, when Welcome to Yorkshire's Peter Dodd told the press that he hoped to bring both the Tour de France and the Tour of Yorkshire to the county in the next five to six years, Guillén said: "Not too much. Honestly, because they were really involved in the Yorkshire World Championships. So far we've not had a strong conversation. There's a hint or a possibility but nothing on paper."

Welcome to Yorkshire have come under fire this year after the controversial resignation of Gary Verity, the man Peter Dodd later replaced. When asked if the chance of bringing the Vuelta to Yorkshire had been hampered by the departure of Verity, Guillén replied: "Gary is very charismatic but he's been replaced by Peter Dodd. I have a good relationship with him.

"I had a good relationship with Gary Verity and it's a territory that's very interested in cycling. For sure they want to hold the Tour de France again, and the Vuelta, and why not?"

The 2020 Vuelta a España route will be unveiled in Madrid next month and with the race set to celebrate its 75th-anniversary Guillén will be expected to pull out all the stops.

"We can expect a pure Vuelta. The identity of the Vuelta is so easy now. From the beginning, you can expect very intense racing. They'll be short stages rather than long but from the first week, you'll see real difficulties in the route with a progression from less to more. We want to have very good mountain stages on the weekend and then have a very big mountain stage the day before Madrid."

While the Tour de France and the Giro d'Italia have unveiled routes that do not include team time trials, the Vuelta will retain the team discipline.

"You'll have team time trial too, in the beginning," Guillén said without giving little else away.

Cyclingnews will have complete details on the Vuelta a España route next month.