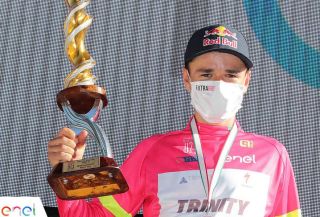 Tom Pidcock (Trinity Racing) won the final stage over the Mortirolo climb ahead of Belgium’s Henri Vandenabeele (Lotto Soudal U23) to secure a dominant overall victory at the Under-23 Giro d’Italia.

Pidcock took the leader’s pink jersey after winning stage 4 and went onto win both of the decisive mountain stages, including the final eighth stage that climbed the Mortirolo. He took overall victory by 2:25 ahead of Vandenabeele.

Italian riders completed the top five but Kevin Colleoni (Biesse Arvedi) was a distant third at 5:54, with Giovanni Aleotti (Friuli ASD) fourth at 6:34 and Filippo Conca (Biesse Arvedi) fifth at 7:52.

Pidcock's strength shows in his versatility as he makes eRacing debut

Pidcock studied a video of the Mortirolo before the start of the stage and wisely let the Italians go on the attack on the early steep gradients, before surging up to them and past them with Vandenabeele, who was targeting the second spot on the podium.

Pidcock made sure he was first past the Marco Pantani monument mid-climb and first over the summit of the 12km, 11 percent climb made famous by the Giro d’Italia. He and Vandenabeele then descended to the finish in Aprica and Pidcock also won the sprint to take his third stage victory after eight days of racing.

Pidcock’s dominance and wide range of bike skills revived comparisons with Eddy Merckx in the Italian media but the pragmatic 21-year-old Yorkshireman shrugged them off, as well any pressure to now focus on Grand Tours.

He has won the Junior and Under-23 versions of Paris-Roubaix and competes at the highest level during the cyclo-cross season. But like wout van Aert and Mathieu van der Poel, he refuses cycling’s usual and often natural stereotypes.

“Why do I have to say now if I’ll one day target the Tour de France? Geraint Thomas was a Paris-Roubaix rider and then won the Tour, ” Pidcock told La Gazzetta dello Sport.