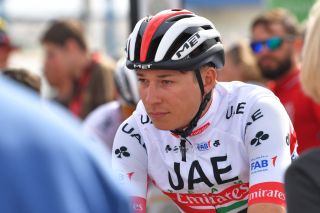 Young Belgian sprinter Jasper Philipsen will lead UAE Team Emirates' seven-man squad at the 2020 Tour Down Under later this month, hoping to match, if not surpass, the stage win he took at last year's race.

Philipsen was awarded the victory on stage 5 at last year's race, despite sprint rival Caleb Ewan (Lotto Soudal) having crossed the line first in Strathalbyn ahead of Philipsen and Peter Sagan (Bora-Hansgrohe).

Ewan was judged to have used his head to bump Philipsen off Sagan's wheel in the sprint to the line, giving the Belgian his first WorldTour victory, with the 21-year-old's only other win having come on a stage of the 2018 Tour of Utah.

Philipsen will be ably supported by the likes of under-23 time trial world champion Mikkel Bjerg, who has joined UAE for 2020 from US team Hagens Berman Axeon, and veteran sprinter Marco Marcato – winner of Paris-Tours back in 2012.

Italian climber Diego Ulissi will have free rein to go for the GC, having finished in the top 10 overall for the past three years, and winning a stage of the race in 2014, when he finished third overall.

"I'm looking forward to starting the season early in Australia," said Philipsen in a team press release. "We started really well there last year with a win, so we'll be hoping to build on that this year. It's always nice to get the season going well and off on the right foot."

The team's Australian sports director, Allan Peiper, added: "UAE Team Emirates is really looking forward to the start of the season at the Tour Down Under in Australia.

"We come with multiple objectives, having Ulissi for the hilly stage finishes and the GC, and our stage winner from last year, Philipsen, for the sprint stages, with a great support team made up of Bjerg, Marcato, Sven Erik Bystrøm, Vegard Stake Laengen and Aleksandr Riabushenko," he said.