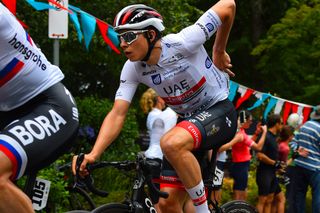 UAE Team Emirates' Jasper Philipsen in the white jersey as best young rider on stage 2 of the 2020 Tour Down Under (Image credit: Bettini Photo)

Belgian sprinter Jasper Philipsen (UAE Team Emirates) will apparently not take part in this year's Tour de France, and is likely to instead compete at the Vuelta a España at the end of the season, the 22-year-old has told the Belgian media.

In 2020, Philipsen again rode the Tour Down Under, where he won the points classification by virtue of finishing in the top five on four of the race's six stages, and then only completed Kuurne-Brussel-Kuurne back in Europe at the start of March before his season was curtailed by the coronavirus-pandemic shutdown.

"The intention is to be ready immediately when the competition resumes in August, even though I'm probably not going to ride the Tour de France [August 29-September 20] this year," Philipsen told Het Laatste Nieuws on Friday. "It'll be a tough Tour, and so the team is focusing more on the general classification with Tadej Pogačar, with Alexander Kristoff for the sprints.

"I should be doing the Vuelta, and also the Classics and important one-day race that don't overlap with it," he added, with the Spanish Grand Tour rescheduled this year for October 20-November 8.

It suggests that Philipsen's programme may include WorldTour races Strade Bianche (August 1) and Milan-San Remo (August 8) – both of which Philipsen rode in 2019 for the first time – while the Tour of Flanders (October 18) and Paris-Roubaix (October 25) wouldn't be on his programme this year, with the latter overlapping with the Vuelta and the former coming just two days before the start of the Grand Tour in the Basque town of Irún.