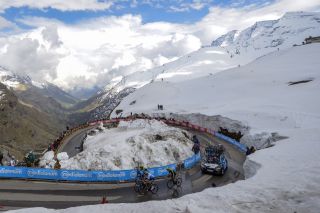 The 2020 Giro d'Italia will be presented in Milan on Thursday afternoon, with the final week of racing expected to be packed with long, mountainous stages before a final 16km time trial to the centre of Milan crowns the final winner of the maglia rosa.

5 moments that defined the 2019 Giro d'Italia

Carapaz: It's incredible to say that I'm the winner of the Giro d'Italia

The 2020 Tour de France has copied the Vuelta a España and opted for shorter stages, fewer time trials but more climbing, which arguably suits the likes of home riders Julian Alaphilippe (Deceuninck-QuickStep) and Thibaut Pinot (Groupama-FDJ). On the other hand, the Giro d'Italia is set to go long and hard, with five stages over 200km in the final week, three of which will include over 5,000 metres of climbing.

Mountain finishes are expected on the slopes of Mount Etna in Sicily on stage 5, on the dirt road up to Laghi di Cancano above Bormio, and to Sestriere after a classic 200km tappone over the Colle del'Agnello, the Col d'Izoard and the Col de Montegenevre on the border between France and Italy.

The stage was rumoured to include a further seven-kilometre dirt section up to Monte Fraiteve, but race organisers RCS Sport are concerned that this could be seen as too difficult in bad weather.

Other key stages include a hilly stage on the route of the Novi Colli sportif near Cesenatico on stage 12, a rolling time trial in the prosecco vineyards similar to that of 2015, a mountain finish at Piancavallo where Marco Pantani won in 1998, a stage over the legendary Monte Bondone to Madonna di Campiglio, where Pantani failed a haematocrit test in 1999, and then, after the Sestriere finish, the final individual 16km time trial to the centre of Milan.

As already announced, the 103rd edition of the Corsa Rosa will begin in Budapest on Saturday, May 1 with a 9.5km individual time trial and two other stages in Hungary before a plane transfer to Sicily. The 21-stage route is expected to head north along the Adriatic coast, snubbing the Tyrrhenian coast and the Campania, Lazio and Tuscan regions.

The total race distance is expected to be above 3,500km, with a total of 45,000 metres of climbing. There is a total of 60km of individual time trialling, which brings the average stage distance down to around 170km.

Despite the climbing, the 2020 Giro d'Italia will give the sprinters something to aim for, with bunch finishes expected on stage 2 to Györ and stage 3 to Nagykanizsa in Hungary, stage 8 in Puglia, and the long 250km stage 19 to Asti in Piemonte.

Other stages to the stunning Greek temples of Agrigento and along the Adriatic coast include some climbing, but could also suit the likes of Peter Sagan (Bora-Hansgrohe), who will be at the presentation in Milan and could confirm he will ride the Giro d'Italia for the first time in his career in 2020.

2019 Giro d'Italia winner Richard Carapaz is expected to return in 2020, as is Vincenzo Nibali, who moves to Trek-Segafredo. The time trials may attract Primoz Roglic and/or Tom Dumoulin (Jumbo-Visma), with Geraint Thomas (Team Ineos) perhaps tempted to target the Giro d'Italia instead of the Tour de France.

Cyclingnews will have full details of the route from the presentation in Milan on Thursday, plus further details and reaction from the riders and teams.