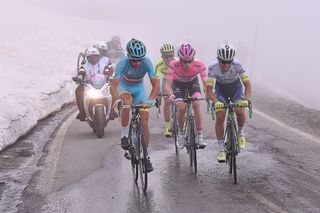 Vincenzo Nibali, Steven Kruijswijk and Esteban Chaves near the top of the Colle dell'Agnello on the 2016 Giro d'Italia. (Image credit: TDW Sport)

The penultimate stage of the 2020 Giro d’Italia will feature the Colle dell’Agnello, Col d’Izoard and Col de Montgenèvre ahead of a summit finish at Sestiere. Details of the stage were confirmed by La Gazzetta dello Sport ahead of the Giro 2020 route presentation, which takes place in Milan on Thursday.

The 200km-long stage 20 is set to be a brutal affair and will include some 5,000 metres of total climbing. The stage on May 30 begins amid the hills of Langhe in Alba, home of Ferrero chocolate and the writer Beppe Fenoglio, and the road rises steadily in the first half of the stage before the gruppo hits the four, fearsome categorised climbs.

The first ascent is the Colle dell’Agnello, which is 21.3km in length and features gradients of up to 15%. The summit is 2744m above sea level and marks the border between Italy and France. The ascent first featured on the Giro in 1994 and last appeared in 2016, when Vincenzo Nibali went on the offensive over the top and Steven Kruijswijk lost the maglia rosa after crashing as he gave chase on the snow-banked descent. Nibali won the stage at Risoul and took the pink jersey the following day at Sant’Anna di Vinadio.

2020 Giro d'Italia route: All the rumours ahead of the big reveal

Next up is the Col d’Izoard, which has appeared in the Giro d'Italia on seven previous occasions, most notably in 1949, when Fausto Coppi was first to the top during his famous solo raid between Cuneo and Pinerolo. The Izoard returns to the Giro after a 13-year absence, though it was a summit finish on the 2017 Tour de France. The 14.2km ascent passes through the haunting Casse Desert and the summit is 2360m above sea level.

A sweeping descent to Briançon follows before the road climbs once again for the day’s third ascent, the Col de Montgenèvre (the Monginevro in Italian), which brings the race back into Italy. The ascent is the shortest of the day at 8.4km, while the maximum gradient is 9 per cent. The ascent was included in the penultimate day time trial in 2000, when Francesco Casagrande conceded the maglia rosa to Stefano Garzelli.

The grand finale, meanwhile, comes on the familiar ascent to Sestriere, the ski resort developed by the Agnelli family in the 1930s. The climb was on the route when Chris Froome seized pink on the road to Bardonecchia in 2018 and has previously featured six times as a summit finish, most recently when Fabio Aru claimed victory on the penultimate day of the 2015 Giro d'Italia.

Giro director Mauro Vegni will be well aware that a stage featuring three climbs in excess of 2,000 metres in altitude in the month May carries an inherent risk of being altered in the event of snow. On the 2019 Giro, for instance, the 2618m-high Passo Gavia was removed from stage 16 due to the risk of an avalanche.

It was previously rumoured that the Alpine finale to the 2020 Giro would include a further seven-kilometre dirt section up to Monte Fraiteve, but RCS Sport were concerned that the ascent would prove too difficult in the event of bad weather.

Media reports suggest that the final week of the 2020 Giro will be an especially demanding affair, with the Stelvio also heavily touted to feature. The full route will be unveiled at RAI studios in Milan from 16.50 CET on Thursday afternoon, and it is anticipated that Peter Sagan will be on hand to announce his intention to make his Giro debut in 2020.

The 2020 Giro gets underway in Budapest on Saturday, May 9 with an 8.6km individual time trial. The Giro will spend three days in Hungary, with stage finishes in Györ and Nagyikanizsa, before the race caravan travels to Sicily for the next three stages, which will include a summit finish at Mount Etna. Unlike recent foreign starts in Israel, the Netherlands, Ireland and Denmark, there will be no early rest day before the first stage on Italian roads.

The Giro will finish in Milan on May 31, and it is expected that the race will conclude with an individual time trial finishing in Piazza del Duomo, as it did when Tom Dumoulin claimed overall victory in 2017.