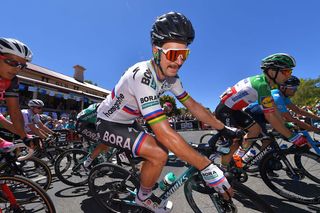 Peter Sagan will be in attendance when the route for the 2020 Giro d'Italia is unveiled on Thursday, strengthening speculation the three-time world champion will make his debut at the corsa rosa next year.

A week after the route for the 2020 Tour de France was presented in Paris, Giro organisers RCS Sport will unveil the 21 stages that will make up the 103rd edition in Milan on Thursday.

Joining 2019 champion Richard Carapaz in the audience will be Sagan, who has won a record seven green jerseys at the Tour de France but has never ridden the Giro.

The announcement of the three-time world champion's attendance at the presentation comes on the back of an article in Sunday's La Gazzetta dello Sport - the newspaper owned by the Giro's parent company - heavily linking Sagan to a place on the start line.

The article points out that Sagan was in Italy earlier this month for an appearance at the Trento Festival of Sport, during which he claimed Italy felt like "home". Sagan used to live in the north east of the country, speaks the language, and used to race for the Liquigas team. La Gazzetta says a Sagan appearance at the Giro will happen "sooner rather than later", with Bora-Hansgrohe team manager Ralph Denk replying 'Why not?' when asked if it would be in 2020.

The 2020 Giro d'Italia will begin in the Hungarian capital of Budapest, 50km from the border with Sagan's native Slovakia. While the full route will be unveiled on Thursday, the Budapest Grande Partenza stages have already been confirmed, with a 9.5km individual time trial followed by two largely flat stages. The famous maglia rosa - the pink leader's jersey - may not be out of reach of a sprinter like Sagan, if they can keep gaps small on the short time trial and take bonus seconds on the following two stages.

Sagan has never raced the Giro, preferring to focus on the Spring Classics before taking a break ahead of building up to the Tour de France. If he wasn't to sacrifice either of those ambitions, it's likely any appearance at the Giro would be short-lived, and that he'd head home without completing all 21 stages.

On Tuesday morning, Cyclingnews will bring you an in-depth look at the likely structure of the route, and we'll have extensive coverage of the unveiling from Milan on Thursday.