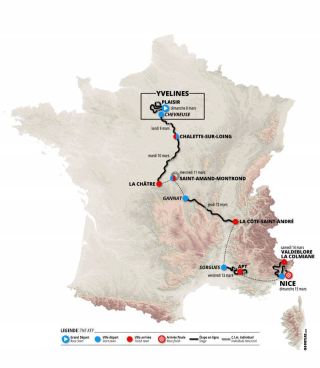 The route map for the 2020 Paris-Nice (Image credit: ASO)

The 2020 Paris-Nice will follow a familiar format to recent years, with early stages exposed to the wind followed by a stage 4 time trial, a summit finish on the penultimate day and a finale in the hills behind Nice.

The route for the 78th edition of the so-called ‘Race to the Sun’ was unveiled on the outskirts of Paris on Wednesday morning, and was described by Thibaut Pinot as "an open edition that will give ideas to more than one."

While the early stages in the often inclement conditions of northern France contain many a pitfall, the keys to the overall title lie in the second half of the race. The crucial climbing test of this year’s races comes on stage 7 in the form of the summit finish on La Colmiane, a 16.3km climb with an average gradient of 6.3 per cent that tops out at 1500m.

It featured in the same role at the 2018 edition of Paris-Nice, where Simon Yates triumphed, and Tour de France contenders will be particularly attentive given stage 2 of this year’s Grande Boucle’ takes in the climb on a hilly Nice-based stage.

The general classification will already have some definition after the mid-race time trial, this year taking place on stage 4 in Saint-Amand-Montrond, the backyard of Julian Alaphilippe. It’s a relatively short time trial, at 15.1km, but the technical nature of the twisting parcours will make it a stern test. It starts with a short climb and descent, followed by an uphill drag towards the half-way mark and a false flat downhill towards the final three flatter kilometres.

The Col d’Eze time trial was last used in 2015 and the organisers are sticking with a finale that has served up the drama in recent years, with a delicately balanced medium mountain stage starting and finishing in Nice. While Egan Bernal had a comfortable buffer last year, 2018 saw Marc Soler wrestle the leader’s jersey from Simon Yates at the last, while the two previous editions were similarly decided by fewer than five seconds.

The opening stage of the 2020 Paris-Nice takes the riders no further to the Côte d’Azur, with a 154km stage starting and finishing in Plaisir, to the south west of Paris. The terrain is rugged and the cobbled climb of Neauphle-le-Chateau (1.4km at 7.8 per cent) in the final 5km could be decisive.

Stage 2 – 166.5km from Chevreuse to Chalette-sur-Loing – and stage 3 – 212.5km from Chalette-sur-Loing to La Châtre – are, on paper, bunch sprint opportunities, but with an explicit threat of the kind of crosswinds that have brought chaos on the race over the years. Last year, Egan Bernal showed his all-round ability with an assured display in the echelons and, after crosswinds played a big part in the 2019 Tour de France, the GC riders will be prepared for an important test.

Separating the stage 4 time trial from the hilly final two stages are two tough, undulating stages that will entice the breakaway specialists. Stage 5 is an achingly long 227km journey on rolling roads from Gannat to Le Côte-Saint-André. With just two categorised climbs, a bunch sprint is still the most likely outcome, but it will be a weary sprint and a test of endurance. Stage 6 has breakaway written all over it, with six second or third-category climbs on the 160km route from Sorgues to Apt.

The 22 teams that will contest the 2020 Paris-Nice were announced on Tuesday. All 19 WorldTour teams received automatic places, along with Total Direct Energie, who topped the second division in 2019. Wildcard invitations were awarded to Arkéa-Samsic and Nippo Delko One Provence.