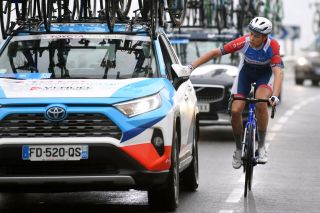 Former Paris-Roubaix and Tour of Flanders winner Niki Terpstra is taking the coronavirus lockdown in his stride, and splitting his time between boxsets on Netflix, time with the family and even some indoor training.

The 35-year-old had hoped to be racing the Tour of Flanders this weekend and with his contract up for renewal, the Direct Energie rider was planning on using the cobbled season to showcase his talents.  However, with racing postponed until further notice Terpstra and the rest of peloton have to show patience.

"It's a special situation and we have to adapt to it. I'm doing that and enjoying my time at home with the family," Terpstra told Cyclingnews from his home.

In the last few weeks, a number of pro riders have synced up with online cycling platforms in order to maintain their level of fitness. Terpstra has joined the bandwagon but has made sure that his time is split equally between work, family time and other essential.

5 riders who need to save their seasons

2018 Tour of Flanders: Terpstra storms away on the Kwaremont - Video

When asked if he had joined the legions of riders now on Zwift the Dutchman joked: "I'm on Netflix. I'm watching a lot of stuff. I'm happy that season three of Ozarks is starting again. I've not watched the Movistar documentary yet but it's on the list. Training indoors isn't my favourite thing but we have to do something."

On a more serious note, the lack of clarity over the future calendar has created a great deal of uncertainty for both riders and teams. Several squads have already announced pay-cuts and laid off non-essential staff. The UCI is still working on a schedule of racing for the second half of 2020 but as a Classics star, Terpstra would have originally looked to have boosted his market value over the coming weeks.

The experienced Dutchman is taking the situation in his stride, however, and is looking to the end of the year with some degree of optimism.

"If you're ending your contract you always like to show yourself. You do that even without the crisis, the difference now is that the silly season with transfers will start later this year. I don't think there's more pressure because of this, because there's always pressure. It's just coming later this time, so we have to be patient. We don't know where the season is going," he said.

"I'm taking a rest and when we have a clear idea on a race calendar then we can start to think about the future. It's time to save your strength because if we still can race later in the year then it's going to be a busy programme.

"I hope that we can race in a few months but maybe it's wishful thinking. I hope that the organisers of the races have a place on the new calendar but the first step is making sure that the situation is under control. Then we can get normal life started, and then sporting events started."