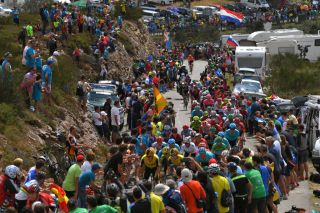 Vuelta a España director Javier Guillén has said that the Grand Tour's change of dates from August to November following the radical restructuring of the calendar now opens up a period of negotiation with other races about how this will affect the rest of the season.

Far from being critical of the switch of dates, Guillén also said it would have been illogical for the Vuelta to continue in the same slot as previously, which would have seen it clash with the Tour de France's revised calendar in late August by nearly ten days. On Wednesday, ASO and the UCI announced that the 2020 Tour has been rescheduled for August 29-September 20.

Speaking to reporters via video conference, Guillén said on Wednesday "with this new scenario, we can get to work with the rest of events, bearing that we all had to move because it made no sense to be in the same dates as the Tour."

"We are holding discussions with all different parties and for now we can't say exactly when the Giro will end and the Vuelta will begin.

"But of course the panorama is much clearer and we're hoping that before May 15 the new calendar from August 1 is fully resolved."

Since its initial edition in 1935 when it kicked off in late April, the Vuelta a España is unquestionably the Grand Tour which has, historically, shifted dates the most. It had a single edition in June in 1948 and another in August in 1950, before settling into a late April slot in the mid-1950s until 1994.

The Vuelta then, amid a fair dollop of controversy, shifted to September in 1995. Increasingly since that change, it has begun in late August, with last year's starting in Torrevieja in south-east Spain on August 24 and this year's due – until Wednesday – to begin even earlier, on August 14 in Utrecht.

Now, however, it will begin in early November, the latest ever for a Grand Tour in the history of the sport and as unprecedented for the Vuelta as the Tour in late August or the Giro d'Italia in October.