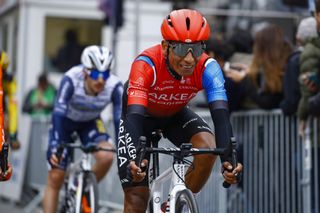 Nairo Quintana believes that Team Ineos will be able to manage the competing ambitions of Egan Bernal, Chris Froome and Geraint Thomas at the 2020 Tour de France but is confident he can replicate the successful form he showed before the COVID-19 pandemic on his debut with new team Arkéa-Samsic.

The Colombian joined the French team this season after two unsuccessful editions of the Tour de France as part of a triumvirate of leaders at Movistar.

In an interview with Marca, Quintana tipped his fellow countryman Bernal as the favourite for this year's rescheduled September Tour and said that he does not expect Froome to leave Ineos before the Grand Départ in Nice on August 29.

"No, I think that the three leaders will continue to go to the Tour," Quintana said.

"I'm sure they'll have the ability to manage everything very well and, with the team they have, they'll manage to have no rivalry. It's a serious line-up, which, in the end, will solve everything during the race."

Quintana enjoyed a sparkling start to 2020 before the COVID-19 coronavirus pandemic forced the interruption of the season in March. His early-season mountaintop victories at Mont Ventoux, the Col d’Eze and La Colmiane marked him out among the leading contenders for the Tour, despite his struggles to make an impression on the general classification since his last podium finish in 2016.

"I always have the motivation to be there. This year I have had a good start to the season and I hope to return to the podium again. I am hopeful in this regard," said Quintana, who downplayed the idea that Pro Continental outfit Arkéa-Samsic would lack the strength in depth to compete with teams like Ineos, Jumbo-Visma and Astana in September.

Quintana will share leadership at Arkéa-Samsic with French national champion fellow climber Warren Barguil, with sprinter Nacer Bouhanni already confirming he will not ride the Tour.

"It’s possible that I lack stronger riders for the mountains. But, well, little by little, we’ll see. It’s true that all the teams mentioned have very versatile riders."

The 30-year-old confirmed that he plans to resume his season at the Tour de l’Ain in August and then ride the Critérium du Dauphiné in preparation for the Tour.

Quintana is currently in Colombia, but he will aim to return to Europe in mid-July. Although international passenger flights to and from Colombia have been grounded until August 31, the Colombian Cycling Federation are working on plans to secure a special charter flight to allow professional riders return to Europe during the summer.

Quintana identified his fellow countryman and defending Tour de France champion Bernal as the favourite for this year's race.

"From my point of view, it seems to me that, for the Tour, Egan is the top favourite, together with Ineos," Quintana said.

"Then for the Giro, I think [Vincenzo] Nibali and for the Vuelta, maybe [Alejandro] Valverde. For the World Championships, it’s very complicated to say now because of all the races that are yet to be done."