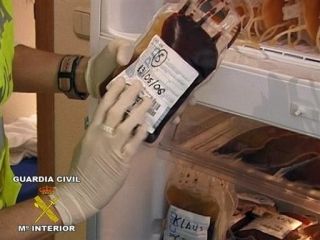 The Movement For Credible Cycling (MPCC) - the association of teams, riders, races and sponsors that work together against doping in professional cycling, have called on the UCI to carry out blood test much closer to the start and finishes of races to help fight what it describes as a 'doping mafia protocol' that operates outside of normal team set-ups.

The MPCC suspects athletes may somehow escape detection by transfusing blood into their bodies in the morning and then extracting the blood soon after the finish of races.

The MPCC also called on the UCI to do more out-of-competition blood tests when riders can potentially take out blood for future transfusions as they start a break from racing. They also called for test for plastics in blood samples to indicate possible blood transfusions and to investigate the use of powders, possibly the banned performance-enhancing substance AICAR (an experimental drug), in drinks in the final part of the stages.

The MPCC explained on its website that its requests for better blood testing were sparked by information provided by banned rider Georg Preidler. The MPCC revealed that Preidler has recently talked at length with Iwan Spekenbrink and Marc Madiot the managers of Team Sunweb and Groupama-FDJ squads where Preidler raced during his professional career.

Preidler confessed to doping in March soon after Operation Aderlass became public, claiming to the Kronen Zeiting newspaper that he "had blood taken out but never put it back." However he appears to have revealed vital details of the latest doping techniques to the MPCC, who said that his testimony "caused a great worry among the members of MPCC."

The MPCC demands follow nine months of revelations from Operation Aderlass, the Austrian and German investigation that uncovered a blood-doping ring.

Authorities first raided the Nordic skiing world championships, catching Austria's Max Hauke performing a pre-race blood transfusion. Other skiers were taken into custody and police continue to investigate the work of German doctor Mark Schimdt who worked for the Gerolsteiner and Milram teams over a decade ago.

The UCI and the independent but UCI-funded Cycling Anti-Doping Foundation (CADF) use a range of anti-doping techniques, including standard post-race and out-of-competition blood and urine tests, the biological passport to control variations in blood values, and expert intelligence to understand how athletes dope.

Lessons have also been learnt by the exposure of doping rings, including the USADA investigation that snared Dr Michele Ferrari, Johan Bruyneel and Lance Armstrong. However, medical research has shown that athletes are able to use micro blood transfusions without the Biological Passport throwing up a red flag. Even if the Biological Passport detects some kind of blood manipulation, it is very difficult to secure an anti-doping conviction and can lead to a costly legal battle against athletes.

The MPCC's letter is dated October 17, with UCI President David Lappartient's reply on November 5. He highlighted the CADF's work in his point-for-point reply to the MPCC.

Lappartient revealed that the CADF carried out 5,307 blood tests in 2017 and 5,585 in 2018 as part of the Biological Passport programme with targeted tests given a preference. He said any increase would depend on an increase in the CADF's budget.

Lappartient pointed out that as well as testing in team hotels on the morning of races, the CADF has carried out testing close the start of races. He linked to a Cyclingnews story about riders from Jumbo-Visma being tested just 45 minutes before the start of stage 18 of the Tour de France. He also said that UCI Anti-Doping Regulations allow testing at any time and at any place, with the CADF testing riders out of competition. Lappartient did not reveal exactly how many out of competition tests the CADF does each year or where the tests are done.

He confirmed that tests are done for traces of Phtalates plastics in blood samples and revealed that the CADF "is investigating not only the use of AICAR but also the use of any other substance that may be widespread within the peloton."

The MPCC acknowledged Lappartient's reply and information but said "MPCC members are worried the question of sporting fair play in the biggest cycling races that they take part in around the world. They want the cheaters to be worried due to what the fight against doping has in store for them."

In the MPCC letter, Legeay concluded: "This fight (against doping) will only be more effective if it feeds on any fact or intelligence that are provided to those that lead it."