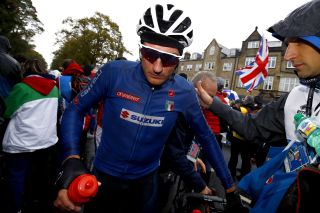 Gianni Moscon has blamed overtraining in the early part of the year for his subdued 2019 season but the Team Ineos rider has drawn solace from his fourth place finish at Sunday’s rain-lashed World Championships road race in Yorkshire.

After ending a suspension-interrupted 2018 campaign with victory at the Tour of Guangxi, Moscon targeted the Classics and a Giro d’Italia debut this year but he was withdrawn from the Team Ineos selection after a disappointing spring. A crash at the UAE Tour apparently affected his build-up for the Classics and he quit Tirreno-Adriatico after two stages.

The Italian told La Gazzetta dello Sport that his year had “started badly and got worse” after an early-season training camp in Colombia.

“The desire to do too much always brings you down. In winter, I worked like never before, hours and hours of specific work. In Colombia at the start of the year, I did the same. I did hours and hours, and I came back a ‘corpse.’ I couldn’t recover because I was never able to have 10 days off the bike,” Moscon explained.

“After the Classics, I was supposed to do the Giro. Then we changed plans and I did the Tour, but there was no chance to rest. If I had known I had to prepare the Tour de France from the start, it would have been different. I worked with an exhausted body, and I got to the Tour tired before it even began.”

Moscon was not the only member of the Ineos supporting cast to fall short of expectations in July, but the squad nonetheless claimed the top two steps of the Tour podium as Egan Bernal beat defending champion Geraint Thomas to the maillot jaune.

During the Tour, Moscon’s weight had ballooned by some 8kg.

“After three weeks, I was dead. Tiredness, [water] retention, I was eating more… I swelled up like a football,” Moscon said revealed.

“I weighed myself when I got home and I was almost 80kg, whereas I’d started the race around 70kg. At least 8kg more. I didn’t recognise myself.”

Moscon had eight days off the bike immediately after the Tour de France and six weeks away from racing in total before he started the Tour of Britain, where he placed sixth overall and earned selection for the Italian team for the Worlds.

He got his season back on track with a training camp in the Italian Alps and lots of suffering while climbing the Passo dello Stelvio.

“Imagine what it was like re-starting training on the Stelvio in that situation,” Moscon said. “I felt like crying.”

For three years in succession, Moscon has been a protagonist at the World Championships.

In Innsbruck in 2017, he marked Julian Alaphilippe’s move on the final lap but was disqualified after the race for accepting a tow from the Italian team car. He placed fifth in Innsbruck a year ago, while on Sunday, he took fourth place after riding in support of teammate Matteo Trentin in the decisive break. Trentin ultimately had to settle for silver behind Mads Pedersen (Denmark).

Moscon is due to race again at the Giro dell’Emilia this weekend as he builds towards Il Lombardia, but the 25-year-old already has an eye to 2020.

“In any case, I’ve learned that certain errors shouldn’t be committed again.”