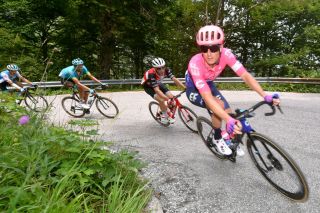 Italian sprinter Sacha Modolo is reportedly on the move to Mathieu van der Poel's Corendon-Circus squad for 2020. The 32-year-old is currently searching for a team after spending the bulk of the last two seasons fighting a debilitating intestinal problem.

According to a report in Wielerflits, Modolo has already agreed a contract with the Pro Continental Belgian team, though the move has not yet been announced. Modolo has raced the past two years with EF Education First, last taking a victory at the 2018 Vuelta a Andalucía.

Last month, Modolo was linked with Corendon by La Gazzetta dello Sport, while Israel Cycling Academy – who are moving up to WorldTour level next season – were also said to be interested in signing him.

Before his time with EF, Modolo spent four years at the Lampre/UAE Team Emirates set-up, after spending four seasons with Bardiani-CSF, with whom he turned pro in 2010. During his ten-year career, Modolo has taken 46 wins, including stages of the Tours de Suisse and Beijing, and two at the 2015 Giro d'Italia.

His last two season have been troubled thanks to an intestinal fungus problem that left him struggling to even climb a flight of stairs at times. It has taken three courses of antifungals and a switch to a special diet to return to normalcy, though not in time to be retained by EF.

"I seem to have been forgotten by everybody," Modolo told Cyclingnews in September. "After the Tour of Flanders, it was confirmed I was gluten intolerant; I changed my diet and started the Giro d'Italia but I was quickly on my hands and knees.

"That's when I visited Dr. Giuliano Poser, who works with [football player, Lionel] Messi. His diagnosis confirmed I had five different fungi in my intestine. He said I'd had them for at least three years, which explained a lot.

"I was prescribed three different courses of antibiotics for 16 days. I've also got a special diet I need to follow for a few months. Dr. Poser says I'll need six months to fully recover. I'm already feeling better but lacking some solid form and a base."

Modolo went on to say that he would accept a one-year deal, just to prove his abilities, and it seems that one might indeed be in the works.

In the same report, Wielerflits also notes that Floris De Tier (Jumbo-Visma), Petr Vakoč (Deceuninck-QuickStep) and Louis Vervaeke (Team Sunweb) are also on the way to Corendon, though the signings are similarly unconfirmed. Like Modolo, however, all three are currently out of contract.