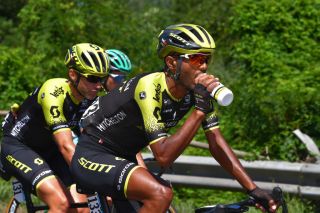 Mitchelton-Scott will arrive at the start of the Gran Piemonte on Wednesday with options for the Italian one-day race, including climbers Lucas Hamilton and Tsgabu Grmay, and New Zealand's Dion Smith, who finished sixth at Milan-San Remo on Saturday, three days after also finishing ninth at Milano-Torino.

The 187-kilometre route from Santo Stefano Belbo to Barolo is a very hilly – but not mountainous – affair, and acts as a 'warm-up' event for Saturday's Il Lombardia, with a large proportion of Mitchelton's Gran Piemonte squad likely to feature in the rescheduled season's second Monument this weekend.

"Part two of the season is what everyone was looking forward to," said Grmay on his team's website on Monday. "I think everyone is excited to race whether it's hot, cold or raining. No one is complaining because everyone just wants to race."

Grmay was a non-finisher at his first race back at the start of August – the Gran Trittico Lombardo – but went on to complete Milano-Torino, and now hopes to be competitive at Wednesday's race.

"The Gran Piemonte course is really tough, but it's all about giving everything," continued the Ethiopean climber. "I'm ready to give everything, and we have a good team to try something. Every door is open for everybody, and there is an opportunity for each rider.

"As a climber, I would say it's a good race and I would like to show well," he said. "At Milan-Torino, I felt better, so I hope I can do something in this race.

"Obviously, Piemonte is seen as preparation for Il Lombardia, but after everyone has missed so many races, I don't think it will be seen as just a preparation race, and if we can get something here it will be great," Grmay said.

Mitchelton-Scott sports director Gene Bates added: "I think, given the heat that we're going to see this week, and the fact that there's nearly 3.000 metres of altitude gain throughout the day, the race will be leaning more towards the pure climbers.

"We will go in with a more open plan," he said, "as this is the kind of course that you need to have good legs for, and we need to be a bit flexible with who we support as the race goes on.

"I think it will be a great prelude to Il Lombardia on Saturday, which is obviously another step in the climbing direction, and I think this whole block has been a great series of one-day races in Italy as it allowed for a really good reintroduction to racing again after the large interruption we had," said Bates.

Other contenders for the midweek Italian race include Astana's Jakob Fuglsang, Mathieu van der Poel (Alpecin-Fenix) and UAE Team Emirates' Fabio Aru, with the latter choosing the Gran Piemonte – and subsequently Il Lombardia and the Giro dell'Emilia – as his route to this year's Tour de France over this week's Critérium du Dauphiné.