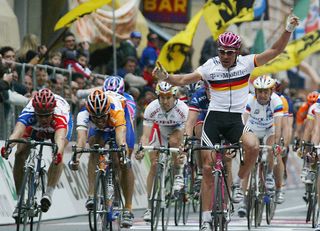 There might not be a 111th edition of Milan-San Remo this weekend but that doesn't mean you can't still obsess about the Italian Monument of cycling.

The race has a long history of drama dating back to the first official edition on April 14, 1907. Since then the race has grown in stature and moving the finish onto the Via Roma in 1949 brought the excitement into the heart of Sanremo.

Milan-San Remo is often a race for the sprinters and even after the addition of the Poggio in 1960 and the Cipressa in 1982 hardly changed that outcome, although it did add more chances for opportunists to foil the fast mens' fun.

See how many of the 110 winners of Milan-San Remo you can recall in this timed quiz.