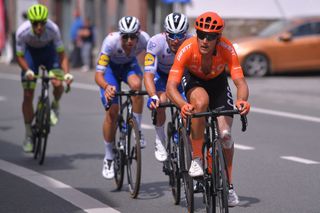 Matteo Trentin will ride for UAE Team Emirates in 2021 after signing a two-year contract with the team. The Italian departs CCC Team, who are still seeking a replacement sponsor to ensure their survival beyond the end of this season.

"I am very happy to join UAE, it’s an ambitious team that is doing very well and where I hope to be able to contribute with some good results," Trentin said in a statement released by his new team.

"Finding a team that has a long and ambitious project is not easy in this period and I am proud that they have trusted me to be part of that."

Trentin only joined CCC Team from Mitchelton-Scott at the start of this season but manager Jim Ochowicz confirmed in early June that his title sponsor was withdrawing from its commitment early due to the impact of the coronavirus pandemic on its shoe retail business. Last month, the team announced that CCC riders who held contracts beyond the end of this year were free to sign elsewhere.

A strong performer in the cobbled Classics, Trentin has won stages in all three Grand Tours during his career and he was European champion in 2017, when he also won Paris-Tours for the second time. He endured disappointment at last year’s World Championships in Yorkshire when he was surprisingly outsprinted for the rainbow jersey by breakaway companion Mads Pedersen.

"The objectives of the coming years? Well, first of all I have unfinished business at the World Championships and I would like to go one better there than last year," Trentin said. "Then there’s Milan San-Remo, the Tour of Flanders and Paris-Roubaix. I would also like to aim for the green jersey of the Tour de France, obviously while still working towards the overall classification objectives of the team."

Trentin will strengthen a UAE Team Emirates squad that is currently headlined by Alexander Kristoff and Fernando Gaviria for the Classics and sprints. The 31-year-old is currently in action at the Tour de France.

"Matteo is a strong reinforcement for our team, particularly in view of our Classics roster," said UAE Team Emirates manager Mauro Gianetti. "He has proved that he is a very versatile rider across many types of races, and has a great turn of speed. We like his way of racing and his winning mentality."