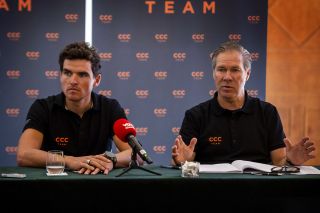 The American manager told Belgian newspaper Het Niewsblad at the Tour de France in Nice on Monday, where the WorldTour team is competing with a squad made up of riders that include Van Avermaet and 2018 European road race champion Matteo Trentin, that he wouldn't rule out starting a new team below WorldTour level if necessary, but that he's using the Tour as a showcase of what he and the team can offer.

"The Tour remains a fantastic showcase to convince sponsors," said Ochowicz, who's perhaps best known for having managed the American 7-Eleven team in the 1980s. "I also have a WorldTour licence for the next two seasons, although I wouldn't feel too bad about starting over at a lower level if necessary.

"It wouldn't be the first time that I'd be starting a team from scratch. That's what I already did with 7-Eleven, which grew into Motorola, and with BMC, for example," he said. "But the more that CCC can show itself [at the Tour], the more enthusiasm I can create about cycling with potential sponsors."

The team announced in June that Polish main sponsor CCC would not continue as the main sponsor, with the shoe-shop chain having been hit particularly hard by the coronavirus crisis.

There was also talk that the Manuela Fundación was close to doing a deal with Ochowicz after the Spanish foundation that had been set to take over as the main sponsor of Mitchelton-Scott saw its deal with the Australian WorldTour team fall through in June.

However, while Ochowicz gave no further hints as to whether a Manuela Fundación deal was still possible, he added: "I'm still fully searching – that's the reality."

While the likes of Trentin and Ilnur Zakarin both still have contracts with Ochowicz's Continuum Sports organisation, which owns the team structure, until the end of 2021, all riders have apparently been told that they're free to look for other teams, with Michael Schär and Gijs Van Hoecke joining Van Avermaet at AG2R next year, New Zealand's Paddy Bevin moving to Israel Start-Up Nation and Nathan van Hooydonck joining Jumbo-Visma next season.