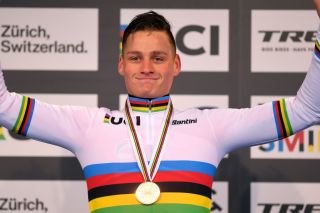 Reigning cyclo-cross world champion Mathieiu van der Poel feels that he would have to give up mountain biking if he wants to target Grand Tour stages in the future.

The 25-year-old secured his third elite men's cyclo-cross world title on Sunday with a dominant display in the mud in Dubendorf, Switzerland, where he won by 1:20 ahead of silver medallist Tom Pidcock (Great Britain).

Following his victory, Van der Poel, who is also European mountain bike champion and won last year's Amstel Gold Race in a remarkable debut Classics season on the road, is continuing to weigh up exactly where his future lies.

"The way I do road cycling, it is possible to combine with mountain bike but if you do the Grand Tours then it's not possible anymore," Van der Poel said.

"I think that Classics races and mountain bike is something you can combine, but not a full road season.

"I would love to do Enduro races but it's not possible to combine. I think it's one of the coolest disciplines around but for now I have my hands full with these disciplines."

After winning the world title in Switzerland on Sunday, Van der Poel said that he will now turn his attention toward the road season. He will first take a well-deserved rest before beginning his preparations for the early spring Classics.

"I was really focused on my preparation for the Worlds and now I'll take some time off before starting to work towards my road season again," Van der Poel said.

The 25-year-old will race the Volta ao Algarve later this month and his spring schedule will include Strade Bianche, Milan-San Remo, Volta a Catalunya, Dwars door Vlaanderen, Tour of Flanders and Paris-Roubaix.

"I haven't really got a target. Of course, I want to target them all, but I'll only do six or seven one-day races. I want to be in good shape for all of them," Van der Poel said.

When asked if the Tour of Flanders and Paris-Roubaix were targets? he stated: "Yes."

After the spring, it will be all change again, and back to the mountain bike, as Van der Poel targets the cross country title at the Olympics Games.

Were he to sacrifice mountain biking in the future in order to race more fully on the road, he feels that he is not the type of rider to target the general classification in Grand Tours.

"Doing a Grand Tour is on the bucket list, to do it once, but mountain biking is a sport I love so much that it would be hard to say goodbye," he said.

"Of course I will have to make a decision some time. My grandfather [Raymond Poulidor] was more of a Grand Tour rider than I am. I know for sure I'm not climbing fast enough to follow the guys to be in front of the general classification.

"It would be more for trying to take stage wins than the general when I go for a Grand Tour."

A solo win in Switzerland

Showing his power, Van der Poel rode away from his rivals as the thick mud in Switzerland on Sunday allowed him to pull out a sizeable gap.

"I think it was a totally different course to last year and this year was way harder but I think I had a way better day as well," he said.

"Last year I was good but not the best version of myself, but today I was definitely the best person of myself."

Thirty-nine racers lined up to race the elite men's event under stormy conditions. Overnight rain turned the mostly flat and technical course into a mud bath, made even more demanding by the short run-ups and fly-overs.

"I was just enjoying myself on the course," Van der Poel said. "The course is very hard but if you ride away on the first lap and immediately have a nice gap then it gives you wings as an athlete.

"I didn't really make a plan but I felt pretty good and it was important to be at the front as it was quite difficult to read good lines."

Van der Poel had a sizeable lead after the first lap and it continued to grow after each subsequent lap. Chasing riders included Great Britain's Tom Pidcock and Belgium's Toon Aerts and Wout van Aert. Van Aert only recently returned to cyclo-cross after taking time off to recover from a serious injury sustained in a crash at the Tour de France in July.

"Maybe I expected a little bit more from Toon Aerts in those conditions but I don't really mind and I'm happy to take the win," Van der Poel said.

"I tried to enjoy it, although it was a very long and hard race, but when you know you are fighting for a world championship jersey it makes it a bit easier.

"I think the first half of the race the mud was easier as it was still raining but then it stopped raining and the mud dried which made it way harder. I was happier that the course changed this much as it was so hard that the strongest guy was always in front.

"I was quite relaxed before the race as I knew that I was in my best possible shape so I gained a lot of confidence."