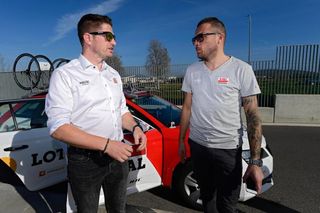 Lotto Soudal's performance manager, Kevin De Weert, has been "temporarily suspended with immediate effect" following an as-yet unnamed incident that occurred last Friday, the day before the start of the Vuelta a España, which De Weert was attending, the team has announced.

"Following an incident on the eve of La Vuelta, and after an earlier warning, the management of the Lotto Soudal cycling team has decided to temporarily suspend its performance manager, Kevin De Weert, with immediate effect, for the remainder of the duration of the race," a press statement from the team, released on Tuesday evening, read.

"The team management will not make any further comments until a conversation between general manager John Lelangue and Kevin De Weert takes place, after his return to Belgium," it added.

Thirty-seven-year-old De Weert only joined the WorldTour team in his role at the start of this season, after having resigned from his role as the national road coach for the Belgian cycling federation following the 2018 UCI Road World Championships in Innsbruck, Austria, in September.

De Weert rode as a professional between 2003 and 2015, riding for teams including Rabobank, Cofidis, QuickStep and LottoNL-Jumbo.