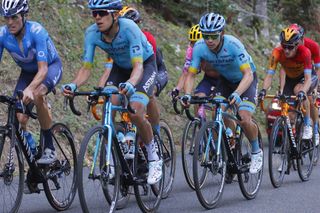 Astana's Miguel Angel Lopez benefitted from both his own strong climbing performance and the misfortune of Colombian compatriots Egan Bernal (Ineos Grenadiers) and Nairo Quintana (Arkéa-Samsic), who both lost time on stage 15 on Sunday, to move up to fourth overall at this year's Tour de France.

With both Quintana and 2019 Tour champion Bernal falling away from the challenge for the podium, Lopez leapfrogged them both, moving from sixth overall to fourth – now 11 seconds behind EF Pro Cycling's Rigoberto Uran and a podium place, but only 10 seconds ahead of former race leader Adam Yates (Mitchelton-Scott).

Lopez's compatriots Bernal and Quintana's time losses mean that the 26-year-old is now the second-best-placed Colombian at this year's race, behind Uran, while Slovenia's Primoz Roglic (Jumbo-Visma) and Tadej Pogacar (UAE Team Emirates) dominate the racing, sitting in first and second place overall, and finishing in second and first place, respectively, on Sunday's stage.

Like Pogacar, this is Lopez's first Tour de France – and the Colombian was among a number of fallers as early as the wet and slippery opening stage in Nice, although he escaped without serious injury. His Grand Tour record includes third place overall at both the 2018 Giro d'Italia and the Vuelta a España the same year, while last year he took seventh at the Giro and fifth at the Vuelta.

Tour de France: Miguel Ángel López crash 'could have been much worse'

"I'm very happy with this stage – the first day in the big mountains," Lopez said on the Astana team website, having finished fourth on the stage, eight seconds behind Pogacar. "I think it was a good one for me, as I was able to stay with the best riders and also to follow their attacks at the end.

"The team did a great job for me during the day," he added. "We had a good plan for this stage, we didn't make any mistakes, and everything went well from start to finish.

"At the end, I still had Harold Tejada [15th on the stage] next to me on the final climb, and he provided me with great support," said Lopez of the 23-year-old Colombian, "but all the other guys were amazing today.

"The climb was a tough one," he said of the final climb of the Grand Colombier to the finish, "but I felt good, and did all I could today. So, fourth place today – that's not bad."

Like the rest of the peloton, Lopez was looking forward to Monday's rest day as an opportunity to recuperate before some tough days of climbing in the Alps to come this week.

"There's still a full third week ahead, and we'll take it day by day, working together as a team. Tomorrow is a rest day, and I want to use it to rest a bit and to recover after these demanding two weeks of hard racing," said Lopez.