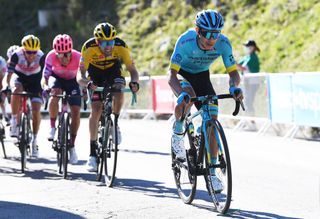 Miguel Angel López believes the days of long-range Tour de France mountain raids are gone, but insisted he still has opportunities to shine in what he described as "a very, very open race."

The Colombian had mostly ridden a faultless opening week, notably riding strongly in the stage 7 crosswinds with his Astana teammates. He hit the rest day down in ninth place after a disappointing second day in the Pyrenees.

After finishing with the favourites on stage 8, he was dropped on the Col de Marie Blanc on stage 9 and lost 54 seconds to Primož Roglič (Jumbo-Visma), Egan Bernal (Ineos Grenadiers), Tadej Pogačar (UAE Team Emirates) , and Mikel Landa (Bahrain McLaren), and 43 seconds to most of the other podium contenders. He headed into the second week 1:15 down on Roglič, and 47 seconds adrift of the podium.

"The assessment is pretty good. We’re up there, around a minute from the top guys, but there’s a long long way to go – more than half the race – so I’m calm about the position I’m in," López told reporters on the rest day.

"Little has happened so far. We’ve had nine very demanding days but still, in my opinion, the Tour is very, very open. Lots of the battle lies ahead and a lot of opportunities remain."

He was non-committal on targeting a spot on the podium. "It’s difficult to respond. The truth is, from here to the end of the race, a lot can happen. I can’t have that certainty that I’lll be fighting for the podium or not, because things happen – crashes, wind… One day in the mountains you can feel empty, the next you can feel good. For that reason I’m going day-by-day, not thinking what tomorrow will bring."

López picked out Roglič and Pogačar as looking very strong, while underlining the collective strength of Jumbo-Visma. In terms of his approach to the next two weeks, he said he’d have to "wait for the right moment and try to take advantage."

The problem is, he feels, that there’s not much room to take advantage at the Tour de France, which he’s riding for the first time after previously finishing on the podium of the Giro d’Italia and Vuelta a España.

"Cycling has changed a lot in recent years, with technology and various other factors that have influenced the racing. Ten or 15 years ago there were attacks from further out, and you didn’t have such strong teams as now, for example everyone in Jumbo-Visma could be a leader, the same for Ineos. Having so much talent in those teams, that diminishes the opportunity for long-range attacks, where you’d find yourself mano a mano with your rivals, with no more than one from each team," he explained.

"That did happen the other day [stage 8]. On the Col de Peyresourde it was only leaders looking at each other. Pogačar took advantage of the moment. It used be like that generally, but now it’s rare that all the leaders are isolated. That means you lose something of the spectacle and obviously there aren’t as many opportunities to attack or pull off great exploits. Now it’s more a case of hanging on and riding on the wheel, and if you can, you can, and if you can’t, you’re fucked."

Although he highlighted the two Slovenians, Roglič and Pogačar, as the strongest riders in the race, Lopez was well aware that he is one of four Colombians in the top 10. Asked by the enthusiastic Colombian media whether he, Bernal, Nairo Quintana (Arkea-Samsic), and Rigoberto Urán (EF Pro Cycling) could form some sort of alliance against the Slovenian duo, López entertained the idea but didn’t see the Tour being raced along national lines.

"Everyone was talking about Colombia and the best climbers being from Colombia but cycling continues to evolve and we’ve seen in the last days that Slovenia clearly has very strong riders, and they’re also maybe stronger in the time trials than us. It’s a nice battle. They’ve done well so far but we hope to have our day, too.

"The three other Colombians could all finish on the podium. Egan is second and will go into the second week with high morale. Urán is a veteran who can use his experience. We’re all on different teams and have different interests, so I don’t know if a collaboration could happen. I don’t rule it out, we’re country-mates, and for me it wouldn’t be a problem to form a kind of alliance, but we’re on different teams and I’m not sure they see things that way. At the moment it’s open and we have to get further down the line, when things are clearer," López said.

He confirmed he was tested for COVID-19 on Monday morning, with the results expected on Tuesday morning, but joined fellow riders in expressing concerns over the road-side fans.

Spectator access to climbs by car has been blocked but big crowds still came out in the Pyrenees, with many riders feeling uncomfortable with the number of fans not wearing masks and not keeping their distance from the riders.

"The Tour is taking all possible measures, but what has been lacking in the last few days is that little bit of collaboration from the fans," he said. "We do everything, as riders, staff, organisers, but it’s scary passing all those fans on the climbs. I know it’s the emotion of the moment, seeing the Tour go by first-hand, but they maybe forget the bad time we’re going through with COVID, but we continue with the Tour."