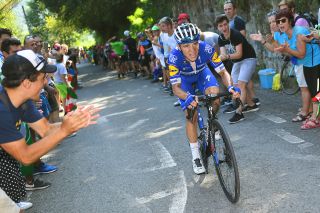 Teenage phenomenon Remco Evenepoel has a chance of winning the UCI Road World Championships time trial, says his Deceuninck-QuickStep boss Patrick Lefevere. Evenepoel has been named in the Belgian squads for both the 54km TT and the 284km road race – the biggest tests of his pro career to date.

Evenepoel daring to dream ahead of World Championships

The 19-year-old Belgian, who dominated the junior time trial – and the road race – at the Worlds in Innsbruck, Austria, last year, will race the event along with World Hour Record Victor Campenaerts, after skipping the under-23 ranks altogether.

"He is certainly not without a chance," said Lefevere of his young charge, in an interview with Het Laatste Nieuws. "He became European champion with a 19-second margin over Kasper Asgreen.

"There is, of course, a big difference between winning and getting a podium place. A medal is nice, but there's only one that counts."

Evenepoel became European TT champion in August, triumphing on the 22.4km course in Alkmaar, in the Netherlands. The Yorkshire time trial will be by far the toughest time trial test he's come up against, considering both the length and the fact that it comes at the end of his longest season since taking up cycling in 2017.

"If Remco was in Yorkshire for the World Championships time trial, he could just as well stay in reserve for the road race. That was the original plan. In the end, he became a certainty [for both races] after his victory at the Clásica San Sebastián and after what he did in Germany," said Lefevere.

What he did in Germany, at the Deutschland Tour, was spend over 100km, solo, off the front of the peloton on stage 2. He didn't win the stage, but it was another example of the powerful solo rides that Evenepoel became known for at junior level.

"I wasn't in Canada so the GP de Montréal was hard for me to follow, but apparently Remco attacked again," said Lefevere. "It was all hands on deck to get him back. It seems that Vincenzo Nibali [Bahrain-Merida], in particular, rode hard behind Remco."

Asked whether he had any prior inclination that Evenepoel would be able to perform at the level he has so far, Lefevere was clear that the teenager has vastly exceeded all expectations.

"We thought he would show flashes of the class he showed as a junior – not that he would have won five professional races by now," he said.

Despite jumping straight from the junior ranks to the professional world, Evenepoel has shown no signs of slowing down, seemingly improving as the year has gone on. If, back in January, third at the Vuelta a San Juan time trial was a stunning result, then what he has achieved in recent months has been nothing short of astonishing.

With 56 race days under his belt, including 15 at WorldTour level, he's exactly on schedule, as far as his debut-season racing programme is concerned.

"We've largely adhered to our programme," said Lefevere. "Remco was never going to ride more than 60 days this year. I think we're about there."

The veteran team boss won't stand in Evenepoel's way if the youngster wants to head to Tokyo next year for the Olympics, either, but first there's a winter programme to plan and an impending move to Monaco.

"He doesn't have the salary to live in Monaco yet," said Lefevere. "He's young and impulsive; the first time he went to Tenerife, he wanted to live there immediately.

"He talked to Philippe Gilbert and then he wanted to live in Monaco. Philippe told me that Remco shouldn't do that. He's only 19; his parents take good care of him. Who's going to cook his meals when he's sitting there alone, morning and evening?"

And speaking of Gilbert, Lefevere seemed to give the Belgian the edge for the Worlds road race title, from his own riders, at least. Lefevere estimated he'll have 12 men competing in Yorkshire – almost half of his squad. For Julian Alaphilippe, the other major favourite from Deceuninck-QuickStep, who'll be representing France, it's a question of recovery from his Tour de France efforts.

"The riders who took part in the Tour de France can't get to that level anymore," said Lefevere. "Riding the Tour à bloc is difficult. Look at Julian – he has to peak for the third time this year. It's not a given.

"Gilbert will be there. He's pretty convinced that he's going to compete for the world title. For Alaphilippe, it could go either way. In Montreal he almost made the decisive attack. But he has to look for that little extra he had in the spring now in the days to come."

The final word from Lefevere came on the subject of which of his riders he'll be cheering for.

"I won't make a secret of that. Gilbert will be riding for another team next year," he said, referring to the Belgian's move to Lotto Soudal for next season.