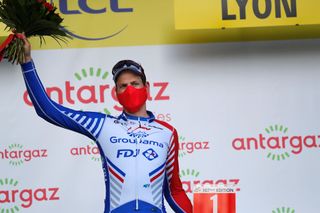 Stefan Küng questioned Bora-Hansgrohe's tactics in the aftermath of stage 14 of the Tour de France on Saturday, wondering why they rode so hard all day for Peter Sagan to finish outside the podium, and why no other teams wanted to attack.

The European time trial champion was speaking to France Télévisions after a visit to the podium to collect the combativity award in Lyon – a reward for his efforts as the lone rider in the breakaway for much of the day.

However, he would have traded in that award for some more company out front.

"I was envisaging a scenario with a much bigger breakaway today," Küng said. "Then the guys said, 'No, Bora are controlling.' But it was only one team who wanted to control things. There are still 21 other teams, and if they all tried something, Bora wouldn't have been able to control it. But there were very few who wanted to try anything today."

Bora-Hansgrohe set a fierce tempo to drop green jersey Sam Bennett for the intermediate sprint, where Sagan helped himself to 15 points, and then dropped him and the other pure sprinters for good on the Col du Béal with 125km to go. They continued to ride hard all the way to the finish, but Sagan could only manage fourth place, third from the bunch behind solo winner Soren Kragh Andersen (Sunweb).

"Frankly, I don't really understand why Bora were riding because they've already tried that twice for Sagan and he finished 13th both times," Küng said. "I don't know where he finished today… Fourth? OK, but for the effort they made… That's their tactics and everyone is free to do their own tactics. But for me the ideal scenario would have been a much bigger break."

Küng went up the road after a flurry of attacks in the opening kilometres, but the active start only yielded two riders in the breakaway, as Edward Theuns (Trek-Segafredo) joined him and the peloton eased up. Cees Bol was originally with them, but, after a bizarre counter-attack from his Sunweb teammate Casper Pedersen, dropped back to the bunch.

Küng rode away from Theuns on the Col du Béal, but, due to the fast pace in the bunch, his five-minute lead consistently diminished and he was caught with 81km to go after the descent of the Côte de Courreau.

"Frankly, when the two Sunweb riders were in between and sat up, I said to my team car, 'I'm going to sit up – there's no point, because in any case Bora are going to ride hard up that climb, it's going to explode and it'll be full gas to the finish,'" Kung explained.

"They said, 'Yeah, but still, stay out front, and we'll see how it goes.' So I said to myself, 'OK, let's try to dig in as best as possible up until the climb.'"

Küng continued to ride hard after the Col du Béal, and pressed on over the Courreau before succumbing to the inevitable, noting that, if nothing else, it was good training with a view to the World Championships time trial on September 25, five days after the end of the Tour.

"When the expected scenario happened, I just wanted to ride at a good rhythm, and work a little with a view to Worlds. After that, I allowed myself to be caught on the flat so I could do the next climb and descent a little more calmly. I felt good, anyway," Küng concluded.