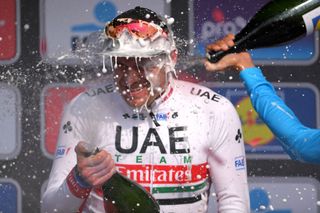 Alexander Kristoff will shake off seven years' worth of habit in 2020 as he skips the Tour de France for the first time since 2012 and returns to the Giro d’Italia.

The Norwegian enjoyed a strong 2019 season, winning his first major spring Classic since 2015 at Gent-Wevelgem, as well as winning six other races and finishing on the podium of the Tour of Flanders.

However, despite signing a new two-year contract with UAE Team Emirates, the 32-year-old has found his options limited in 2020, as Fernando Gaviria is the favoured sprinter for the Tour, while Tadej Pogacar and Fabio Aru go for the overall title.

"It's not 100 per cent ideal," Kristoff told Cyclingnews at a recent team training camp in Spain, trying to find the positives.

Katusha-Alpecin say Kristoff is 'too heavy'

"I've never had a summer vacation as long as I've had kids – the whole summer it's always been 'daddy's in France' - so it will be nice to spend some time with them over the summer.

"I hope I'll do the Tour again in the future, but you never know. Maybe I've done my last Tour. I'm starting to get older. Still, I hope I have a chance to go back."

Racing the Giro leaves Kristoff with a tricky balancing act, given he'll want to be in top shape for the spring Classics, beginning with Milan-San Remo on March 22 and ending with Paris-Roubaix on April 12.

After starting his 2020 season on the Iberian peninsula at the Volta a la Comunitat Valenciana, Clásica de Almería, and Volta ao Algarve, Kristoff will head to the so-called 'opening weekend' in Belgium for a taste of the Classics before Paris-Nice takes him into the proper spring period.

"It's difficult to balance being in shape for the Giro if you want to be in shape from San Remo to Roubaix. It's less than one month, so there's not really time to start the Giro in top shape," he said.

"I will not compromise – I'll focus everything on the Classics, and if I do well there, my season is already good, and we'll see how it goes in the Giro. I'm motivated to do the Giro, and I'll try and come back into shape in the short time.

"Maybe I'll just have a few days rest after the Classics before building up to the Giro. There's a limit to how much you can lose in one month. If I can have one or two good days, that would be enough."

Gaining 6kg in the first week of the Tour

If the 2019 Tour does indeed turn out to be Kristoff's last, he will have ended on a bitter note. After a strong spring and decent latter part of the season, the Tour was the major area of disappointment last year.

It was a major disappointment for UAE Team Emirates as a whole, as each rider underperformed, with rumours circulating that a change in sports drink had caused the riders to absorb too much water.

Kristoff acknowledged that was part of the problem but that there were wider reasons the riders were overweight, as he revealed he gained nearly six kilograms in the first week.

"There are many things that happened. Ultimately, the whole squad was too heavy. I maybe started the Tour at 77.9kg and after a few days I was close to 84kg. Then it's difficult to perform," he said.

"I think the problem was that we got too much energy. It's maybe hard to believe, but some days are not so hard, and if you eat or drink too much you can actually get too many calories. The body absorbed a lot of water, and we gained some kilos there, but we also got some kilos of extra fat because we were eating too much.

"We were maybe not monitored enough but the doctors think they have the reasons and the solutions. The team saw what happened and worked on it and already the team performed very well in the Vuelta. The team has hired a new nutritionist, who gives us more advice on what to do at home, and during the races we'll be monitored more than before. It was a one-time mistake and for sure we won't make the same mistake this year."

Kristoff has often faced question marks over his weight, with his old team, Katusha-Alpecin, telling him he was 'too heavy' in 2017. Yet, somewhat perversely in a sport where being light is given such importance, Kristoff believes being 'slightly too heavy' was one of the factors behind his 2019 spring success.

"I was more skinny in 2018 and I maybe felt lighter in the races but in the end I was empty. In 2019 I was more heavy and maybe suffering more during the races, but at the end I still had some gas," he said.

"There's always a fine balance – if you're too light you can lose power. Maybe this year I was slightly too heavy, but I also had enough energy to handle it."

That's exactly what happened when he won a particularly frantic edition of Gent-Wevelgem, attacking ahead of the Kemmelberg to ensure his place in a group sprint for victory.

"At the start of that race, I did not feel good, but by the end I had a good feeling," he said.

A week later, Kristoff finished third at the Tour of Flanders – his first Monument podium since he won that same race back in 2015.

"Those two races gave me confidence I can still perform at the top level. I’ve had some high places but the podiums had been missing. Those are the feelings you chase as a pro," he said.

"I always knew that, if everything went the right way, I could make it, but the last years it wasn’t really there. This year, I had that one small extra gear that made me able to follow the strongest guys again, so that gave me confidence, and I hope I’m on the same level this year."

As for whether he can win another Monument: "I believe it's possible. I know I have good endurance. If I manage to survive the hard parts, maybe one hour from the finish, and it comes together, then I have a great chance."