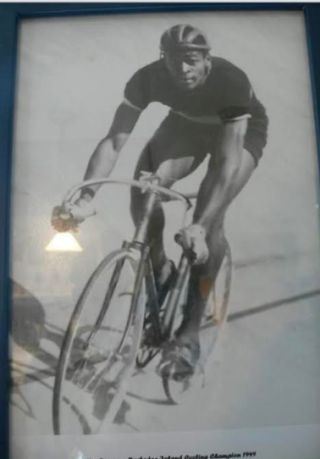 Ken Farnum, an Olympian and three-time New York state cycling champion whose racing elevated him to folk hero status in the 1950s, died April 4 at age 89 in New York City from complications brought on by COVID-19, according to Andrea Lockett, a family friend.

Born on the Caribbean island of Barbados, Farnum began racing there at age 10. He developed in pack races on circuits laid out on the grass of flat cricket fields. Farnum grew to a little over six feet tall and a trim 180 pounds. Tactical savvy and a capacity for powering big gears earned him victories in Barbados and in venues around the Caribbean, including Jamaica and Trinidad. He collected eight West Indies sprint titles.

In 1952 he earned a berth on Jamaica’s track cycling team that went to the Helsinki Olympics when those island countries were part of the British Commonwealth. He raced in the matched sprints and the 1,000-meter standing start individual time trial. He finished out of the medals, but he returned home as Barbados’s first Olympian.

He worked a day job in communications for what is now Cable & Wireless in Barbados. After the Olympics, he moved to New York City. He continued working in communications by day and on his own time he kept training and competing.

"I remember watching him race at the old Flushing Meadows half-mile track," recalled three-time Olympic sprinter U.S. Bicycling Hall of Famer Jack Simes III. The cement oval in the New York borough of Queens occupied what is today a parking lot for Citi Field, home to the New York Mets.

"He was well built. I remember him dicing it out with New Jersey state champion Walter Grotz. Farnum rode criteriums, too."

Farnum, a brown-skinned cyclist in a sport dominated by white riders, won the 1955 Amateur Bicycle League of America (predecessor to USA Cycling) New York state championship. It marked the first time since Major Taylor - an African American who won national and world professional cycling championships around the turn of the century - that a cyclist of colour won domestic races. In 1956 and 1957 Farnum defended his titles.

"He definitely was a folk hero," said Butch Martin, a two-time Olympic cyclist and U.S. Bicycling Hall of Famer. "If you think of the sport in the 1950s, kicking some white guy's ass was a big deal. Farnum could do that. He had a big following."

"Herbie told me he had seen Farnum in a track race where everybody was bunched up close and Farnum's front wheel overlapped the rear wheel of the rider in front," Martin said. "They went into a banked thirty-five-degree turn. Farnum has such incredible handling skill that he kept his bike up all the way through the turn. Nearly anybody else would have crashed."

Barbados was granted independence as a state in 1966 and subsequently sent its own Olympic teams. The Barbados Olympic Museum in Bridgetown recognized Farnum as the country’s first Olympian. In March 2012 he visited the museum to share his experiences at the 1952 Helsinki Olympics.

He is survived by wife Judith, son Ken Junior, daughter Judy, and two sisters, Colleen and Ann, in Barbados, as well as nieces and nephews.