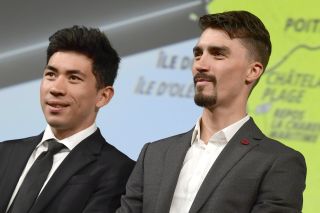 Deceuninck-QuickStep have confirmed that Julian Alaphilippe’s cousin has joined the team’s coaching staff. Franck Alaphilippe has coached Julian Alaphilippe since he was a teenager, and it was reported earlier in the year that he would take up a formal role with the team ahead of the 2020 season.

“I will be working hard to help the team remain the best in the world and win the most beautiful races. My dream is to help a rider become world champion,” said Franck Alaphilippe in a statement released by the team on Friday.

In recent years, Franck Alaphilippe has been employed in the French public sector as head of the cycling training centre in Saint-Amand-Montrond. He told L’Équipe in July that he would take a leave of absence from the position to take up his full-time role at Deceuninck-QuickStep for the next two seasons.

As well as coaching his cousin and young riders in Saint-Amand-Montrond, Franck Alaphilippe’s clients have included Marion Sicot, who tested positive for EPO at this year’s French national championships. Sicot, who has denied wrongdoing, said that she had stopped working with Alaphilippe prior to the French championships. Franck Alaphilippe told L’Equipe that he had coached Sicot remotely using email and an online training platform in the first half of 2019.

“I am looking forward to helping the squad achieve their targets, continue winning and join in the Wolfpack spirit,” Anastopolous said.

Deceuninck-QuickStep manager Patrick Lefevere welcomed the arrival of Alaphilippe and Anastopolous, who will work alongside coaches including Koen Pelgrim and Tom Steels.

“We have announced a number of rider signings ahead of next season, but the addition of Franck and Vasilis are also very important,” Lefevere said. “Both have proven track records in improving riders and getting them in the best possible shape for the most important races.”