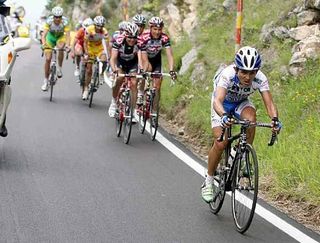 The silhouette is as unmistakable now as it was on those heady May afternoons fifteen years ago, when he sprang from obscurity and came within 45 seconds of carrying off the Giro d’Italia aboard a seemingly ill-fitting bicycle. Nobody quite knew what to make of José Rujano then, and he has remained an enigma ever since.

When Rujano, who turns 38 next month, was named on the Venezuelan team for the Vuelta a San Juan, one might have assumed that he had been included to serve as a mentor to his younger compatriots. Not so. Almost seven years on from his last, unhappy experience of racing in Europe, he is eager to return to The Show one final time. The Vuelta a San Juan and next month’s Tour Colombia 2.1, he explained, are something of a shop window.

“I’d like to try to go to Europe again on a WorldTour team,” Rujano told Cyclingnews ahead of the opening stage. “I want to show that I still have the legs for that. I’ll try to show myself in these next two important races, and then see if afterwards if a team wants to sign Rujano for the Giro, Tour or Vuelta a España.

His last race in Europe was the 2013 Tour de Romandie and Rujano never lined out for Vacansoleil again after they left him out of that year’s Giro following his implication in the ‘Operazione Amateur’ doping inquiry.

“I wasn’t really involved at all, there was just a telephone call with a friend, but I’ve still done UCI races since then, and now I want to show all over again that Rujano is still here,” he said.

Rujano raced sparingly in Latin America in the years that followed, claiming victory at the 2015 Vuelta al Tachira, but his motivation to compete gradually waned and his intermittent appearances became ever more infrequent. He didn’t race at all in 2018 but was inspired to take to the bike again by the exhortations of his daughter Victoria and son Jeison, himself a promising amateur.

Riding on the mountain roads above his home in the Andean town of Santa Cruz de Mora, Rujano gradually shed himself of excess kilos and found his appetite for racing slowly returning. A sense of unfinished business, perhaps. “I lost my love for cycling maybe five years ago, but then I got it back again two years ago, and now I’m more in love with it than I was when I was younger,” he said. “My son is a big motivation.”

At the peak of Rujano’s career, his renown in his own country brought him favour and prestige from admirers in high office. In 2011, Hugo Chavez pledged government support for Rujano to form his own professional team, but such a project seems eons away in a Venezuela riven by the impasse between Chavez’s successor Nicolas Maduro and opposition leader Juan Guaidó. Amid the political stalemate, meanwhile, the human crisis escalates. Over three million people have left Venezuela since 2015 and it is estimated that nine in ten Venezuelans are living in poverty.

“In Venezuela, there are many problems, we hope that our country can recover as soon as possible and do better on the things that aren’t going well,” Rujano said. “We hope there can be an agreement to improve things because at the moment we are the ones suffering.”

Rujano’s reputation, in Europe at least, rests largely on his remarkable performances in two editions of the Giro. In 2005, he took flight on the Colle delle Finestre on the penultimate day and almost swooped to overall victory at the last at the finish in Sestriere. Six years later, he was perhaps the only man who could keep step with Alberto Contador in the mountains, winning atop the Grossglockner and placing 6th overall. It was no coincidence that, in both 2005 and 2011, Rujano was managed by Gianni Savio, the man who first brought him across the Atlantic, but the relationship between rider and team crumbled rapidly on each occasion.

In 2006, Rujano famously abandoned the Giro within sight of the finish line at La Thuile before a mid-season switch to QuickStep. He returned to win a stage of the 2011 Giro with Savio after lacklustre spells at Unibet and Caisse d’Epargne, only to depart acrimoniously midway through the following season.

And yet, when Rujano formulated his most recent comeback, one of his first calls was to his old manager. The prodigal son will not be welcomed back for a third stint, as Savio explained that he had no place on his roster for a rider of that age, but he was diplomatic when asked to assess Rujano’s prospects of earning passage to Europe.

“It’s hard to make a judgement,” Savio told Cyclingnews in San Juan. “He called me already three or four months ago, but I explained to him that my philosophy is to launch young riders, so I don’t sign riders of 36 or 37. But José spoke well, recognising the errors he made himself in the past.”

“He was a young man who met with success but didn’t know how to manage it. Back then, I tried to give him advice, but he didn’t listen to me. Now he says, ‘Tenía razón, Gianni: you were right.’ He was a bit overwhelmed by his own status as a big personality especially here in South America. In Venezuela, he was invited everywhere, there were girls who wanted him. He was swept away by his success.”

This week in San Juan, Rujano will look to shine on the summit finish atop the Alto Colorado, where he will test himself against men like Julian Alaphilippe and Remco Evenepoel as the road snakes upwards to an altitude of 2500 metres. “I want to have a go there,” he said.

No matter what he achieves here and in Colombia, of course, the prospect of Rujano returning to ride Grand Tours seems fanciful in the extreme. That does not mean, however, that the name will not feature again in the European peloton some day. At the recent Vuelta al Tachira, one Jeison Rujano placed 18th overall in his first race out of the junior ranks.