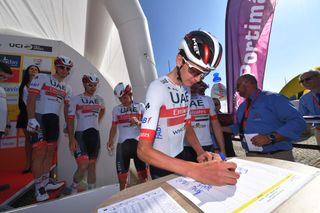 New UAE Team Emirates signing Joe Dombrowski should have been targeting this spring's Giro d'Italia, but instead – just like all his other teammates and colleagues – he finds himself waiting to see when, and if, the cycling season will resume.

"As a team, we got off to a tremendous start this year, winning 11 times in the first two months," he wrote in a blog-style post on his UAE Team Emirates squad's website. "We worked very hard during the off season in the winter, and it seemed like all that hard work was paying off. We were going into every race with our tails up, the momentum on our side, and winning. Of course, it was disappointing to have to stop racing, but if you take a step back and look at the bigger picture, as sportsmen, we are not alone in this, and the correct decision was made."

After five years with Jonathan Vaughters' EF Pro Cycling team, and its previous guise as Cannondale, Dombrowski made the move to UAE Team Emirates for the 2020 season, and made his racing debut for them at the Volta a la Comunitat Valenciana.

Dombrowski back in business with 12th overall at Giro d'Italia

"Overall, it was a good start to the year for me, but in Spain I had a couple of crashes, which put a dampener on things. However, this was the first chance I had of riding with Tadej Pogacar, which was an absolute pleasure – especially when he won so convincingly."

Pogacar won two of the five stages, and took the overall title with a six-second margin over both Jack Haig (Mitchelton-Scott) and Tao Geoghegan Hart (Team Ineos).

"Tadej is a very special talent and looks to have a great future ahead of him," said Dombrowski.

'I hope I can show the team that I deserve some freedom, too'

From Spain, the 28-year-old American climber then moved on to the five-day Volta ao Algarve.

"I felt quite good in Portugal, my next race, and was riding strongly. I was there to support Rui Costa, so it wasn't a race that I'd be chasing my own results at. UAE Team Emirates has a very talented roster, and so in coming to a team like this, everyone must do their part. I was there to help the team and back Rui where needed," Dombrowski said, with Costa taking fourth spot overall, 56 seconds down on overall winner Remco Evenepoel (Deceuninck-QuickStep).

"In my own head, this race confirmed my reasoning to join UAE Team Emirates, I thought, 'Yeah, I'm where I need to be now,' which was great."

It proved to be Dombrowski's second and last race of the 2020 season so far, and the 10 days of racing he's had is considerably more than a lot of riders have managed.

"When we get back to racing, I hope with hard work, focus and a bit of luck I can show the team that I deserve some freedom, too. I think it would've been a good spring for me had the season not been stopped," he said.

"Pre-isolation, I was spending my time in Nice, France, with my wife, but we returned to the US a few weeks ago," Dombrowski explained. "In Nice, we live downtown, in the port, so it's very difficult to go outside and cycle. In the States, we live in a more rural area, and I felt at this time, it would be a better move for us. Generally speaking, Nice has become our home, but we still get back to the US over the holidays."

Unlike has been the case in France, Italy and Spain during the coronavirus lockdown, in the US, Dombrowski is permitted to train outdoors, which has been "a huge relief", he said.

"It's important to stay fit during this lay-off, and it's given me a chance to focus on things that are easier to neglect during the race season, like strength and mobility work."

Dombrowski said that his main goal for the first half of the season had been the Giro, which, before postponement, was to run from May 9-31. Instead, provisional, revised dates for the Italian three-week race have been set for October 3-25, and, if he does get to ride it, Dombrowski will be looking to build upon his 12th place overall at last year's Giro, which was his best Grand Tour result to date.

"I am optimistic that we will still be racing later this year, and when we have a clearer picture of what that might look like, everyone can start thinking more seriously about their objectives," he said. "In the meantime, it's about keeping fit, staying positive and looking at the scenario pragmatically – it's not often pro cyclists get to spend so much time with their families during this time of the year, so for that, I am grateful."