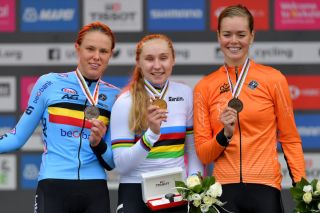 Megan Jastrab secured the sixth medal for Team USA at the UCI Road World Championships when she won the junior women's road race in Harrogate on Friday. The 17-year-old offered advice to her compatriot Coryn Rivera, warning her to stay safely at the front if she wants to win the world title in the elite women's road race on Saturday.

"Stay at the front on this course," Jastrab said when asked if she had any tips to share with her teammates the will race the elite women's 150km race from Bradford to Harrogate on Saturday.

"Even though the roads are wider than what we've raced on in the past, there was a lot of tension in the field. A lot of people over braking, overreacting, and crashes happened early on. So, waste that extra little bit of energy to stay safe at the front."

Jastrab said she relied on her teammates Katie Clouse, Gabrielle Lehnert, Ava Skyes and Zoe Ta-Perez throughout the 86km race. After crossing the finish line with the victory, Jastrab stood for a moment to watch Clouse and Lehnert finish, all three hugged in celebration of their success. The UCI later announced that Clouse had been disqualified for holding on to a water bottle for too long during the race.

"I want to thank my teammates out there because it was nice to have them with me and working," Jastrab said. "I had to be patient and time [the finish] right, but not blow the whole race because we waited for too long."

USA Cycling brought in Joanne Kiesanowski to work with the junior women's program at international events and the World Championships. She told Cyclingnews that previewing the course played a key factor in the success of the US team.

"We did a lot of course recons to make sure there were going to be no surprises, especially in the last 30km, which we got dialled," Kiesanowski said. "They really knew all the turns, roundabouts, towns and they were so confident.

"Having that course knowledge was imperative. The course run-in was so tricky and that suited our team perfectly. We wanted to make sure we knew the course like the back of our hands. The big goal today was to have no regrets and make no hesitations."

Jastrab victory comes off the back of an impressive World Championships for Team USA. In the under-23 time trial on Tuesday, Ian Garrison and Brandon McNulty secured the first two medals, silver and bronze, respectively.

Chloe Dygert Owen earned the nation's first gold medal in the elite women's time trial later in the afternoon. Quinn Simmons took another gold medal, and Magnus Sheffield the bronze, in the junior men's road race on Thursday. Jastrab's victory was the third for the Americans, so far, and the sixth medal in total.

"It helps a lot [with motivation]," Jastrab said of her teammate's success earlier during the week. "The team has had high morale. It was really motivating to see everyone's hard work come together and we wanted to keep it going."

Jastrab was a favourite coming into the race having secured international wins at Nations Cup events Trofeo da Moreno-Mini-Trofeo Alfredo Binda, U17 Gent-Wevelgem and first place at the junior Healthy Ageing Women's Tour in Great Britain. She said having the experience of racing against the best in the world was valuable to her success in Yorkshire.

"It was nice to know the competition, who was in the breakaway and who all the riders were," Jastrab said. "I would follow those wheels and trusted who I was racing with, and so thank you to USA Cycling for giving us those opportunities to race internationally."

In August, Jastrab won double world titles in the Omnium and Madison and the 2019 UCI World Junior Track Championships in Frankfurt, Germany. Adding the junior road world title to her collection makes her one of the most versatile and promising riders of her generation. She plans to continue racing in both disciplines.

"I love racing my bike and I'm excited to try out for different fields and the elite category and see where it takes me," Jastrab said. "Right now I'm just open-minded and taking opportunities where I see them."

Jastrab competes during the road season for American UCI team Rally UHC. This year, being only 17, she was not permitted to race in UCI-sanctioned events. She turns 18 in January and is looking forward to competing in higher-level events with Rally UHC during the 2020 season. She's also hoping to gain more experience racing in the elite category in Europe through programs at USA Cycling.

"I'd to get some experience racing with the elite women on the circuit in Europe," Jastrab said. "It will be good preparation for the following year. We don't have an under-23 category and so it's a big jump going from junior to elites. It's like getting thrown into the deep end. I'll do all the UCI races next year in the US."

After Yorkshire, Jastrab will return to the US where she's enrolled in her first year of college at Milligan College in Johnson City, Tennessee. "The college has been great about helping me out, to take my exams that I'm missing right now when I get back. Now that Worlds are over, I can just focus on school."