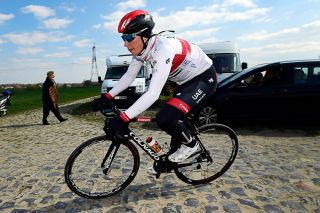 After spending the first two years of his professional career at UAE Team Emirates, Jasper Philipsen will drop down to ProTeam level in 2021, joining Alpecin-Fenix on a two-year deal.

Philipsen, a sprinter and Classics rider, has been touted as a top talent since his junior days and an impressive U23 season with the Hagens Berman Axeon team.

Still only 22, he has won two races since joining UAE Team Emirates - a stage of the 2019 Tour Down Under and a stage of this year's Tour du Limousin, while also taking a number of placings in other races.

"I am extremely excited about this new chapter and opportunity in my career," Philipsen said.

"The team already developed a nice project. They are ambitious and advanced in terms of performance and the entire framework is very professional.

"These are decisive factors to choose for the Alpecin-Fenix project. I am convinced that I will be able to fully develop my potential and reach my highest personal level, together with the team. I hope this results in many successes together."

Originally a predominantly cyclo-cross-oriented squad, the Dutch team run by Philip and Christoph Roodhooft stepped up to ProTeam level in 2020 and have earned invites to bigger and bigger races, thanks to the presence of Mathieu van der Poel.

Philipsen will join forces with Van der Poel in the Classics, while also offering an option for the bunch sprints.

"We have an absolute leader with Mathieu van der Poel, but we are constantly striving to strengthen the entire team. We have achieved this in the past with riders such as Tim Merlier, and we plan to do it again with Jasper," read a statement from the Alpecin-Fenix management.

"The fact we already won races with seven different riders is the proof that the team has become stronger. With this philosophy in mind we were looking to recruit another fast rider and co-leader for the classics. With Jasper Philipsen we believe we have two into one. We are convinced that together with Jasper, we can make beautiful stories."