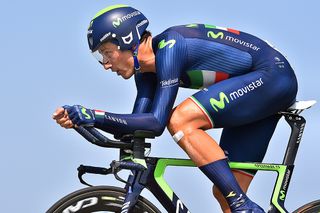 Adriano Malori was on track to become one of the best time triallists in professional cycling when a high-speed crash at the Tour de San Luis virtually ended his career and dramatically changed his life. The Italian suffered mentally and physically as he tried to make a comeback and has now written a book that reveals how he fought to rebuild his life and become a coach as a way of staying in the sport.

"My book is about hope, and about understanding the real problems in life," Malori explained in an interview with La Gazzetta dello Sport.

"People often say 'Never give up', to the point that it's become an obvious slogan, but when things become really difficult, not giving up is the only thing you can do. Depression is crouching in the corner, black dogs (as Churchill termed the feelings of depression) are ready to attack you. In that moment you've got to find the strength to swim back up the river. It can be done.

"Now I laugh at life's little problems. Before, I used to get angry when a car mechanic fitted the wrong wheels on my car or a restaurant I went to was full. During the rehabilitation after my crash I saw children who were fighting to be able to raise their arms. Things like that open your eyes about life."

Malori has 'goosebumps' at speedy recovery from San Luis crash

Malori's life changed forever during the fifth stage of the 2016 Tour de San Luis. He was leading the peloton at over 60km/h when he hit a pothole in the road and crashed hard, suffering serious facial and brain injuries. He was placed in an induced coma before being transferred to a specialised clinic in Buenos Aires. The Italian then began a long process of rehabilitation on his return to Europe, spending a long time in a specialist clinic in Pamplona thanks to the support of the Movistar team.

Malori fought against the doubts of several doctors and recovered from damage to the right side of his brain that had limited his use of his right arm and shoulder. He returned to racing at the Canadian WorldTour races eight months after his crash but was unfortunate to crash again at Milan-Torino, fracturing his collarbone. He tried to race in 2017 but realised it was time to make a change.

"The goal I had in my life was to do something special in the world of the bike. I cannot do it as a racer and it will be another way," he said when he announced his retirement in July 2017.

"My recovery has been impressive. That's not me saying it; those are the doctors' words. That's the good thing I got out of all these month of rehabilitation - that people who have this kind of problem can be inspired by someone who has recovered. This is the important thing in my story; it’s a message of hope.

"I'm nothing special but I refused to sit in a wheelchair. I want to give other people a reason to smile and some hope. They might not all be able to make a full recovery and I'm not a doctor but I want to give them hope and encouragement."

Malori has gone on to create a modern coaching service near his home in Parma called 58x11 – the gear he often pushed in time trials – using his own experience to help other riders. During his career, Malori was under-23 world time trial champion in 2008, finished second in the elite time trial at the 2015 Road World Championships in Richmond, and was also Italian time trial champion seven times and wore the maglia rosa for a day at the 2012 Giro d'Italia.

"It's really nice to share the emotions of success with my athletes. I do a job that I love and I'm using my professional experience to help others," he explained.

Malori reveals in his book that a doctor once told him he would only ever be able to ride his bike to shops and that the damage to his brain could mean he'd never return to full health. But Malori still rides his bike and has proved the doctor wrong.

"He offered to take me out for dinner if I proved him wrong, so perhaps I need to take him up on the offer. I'd go with my wife Giorgia, who helped me so much during all the difficult times," Malori concluded.