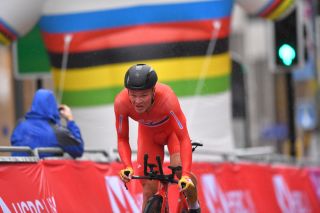 The signing of Tom Dumoulin and the unveiling of their Tour de France team may have dominated the Jumbo-Visma training camp this week but the Dutch team has also invested heavily in the future with Tobias Foss a standout addition.

The 22-year-old won the Tour de l’Avenir this year and finished third in the U23 version of Liege-Bastogne-Liege to cement his reputation as a rising star.

Hailing Edvald Boasson Hagen and Chris Froome as his heroes growing up, the former biathlete may have stuck to his first love if his aim was a little better but biathlon’s loss is cycling's gain as Cyclingnews recently found out.

Tobias Foss: I was always cycling a lot with my father when I was younger but I was also really into biathlon at the time. The only problem was that I was a terrible shot. In the few races I managed to hit the targets I was quite high up in the results but at the same time the local cycling club would loan out bikes and that was great as a kid because I had a real interest in cycling. I wasn’t that competitive to start with but once I got on the road bike I didn’t look back. Maybe if I could shoot a bit better I’d still be doing biathlon.

CN: Who was your sporting hero growing up?

TF: My big hero was Chris Froome but for me, it started with Edvald Boasson Hagen. He was my first big idol and then it was Froome as I started to get more and more into the sport. In the winters Edvald used to come to our cycling club dinner and as a child, it was great to see him. He would talk to us as a group but I was really shy and never managed to ask him a question, but as a 13-year-old it was a big deal. The bike I got to ride back then was a Scott, and Edvald rode one of them too.

Then with Froome, I really liked climbing but I was one of the heavier guys. He had a similar story so he became an idol for me. My dream growing up was to win the Tour de France and he did it, so of course that made him a huge role model. I won L’Avenir this year but there’s still a huge way to go. That win made me believe that it’s possible though.

CN: How did you make the step up to Jumbo Visma?

TF: The team invited me to a camp about a year and a half ago. They’ve been following me since then and it felt like a natural move to come here. They also gave me the chance to sign here quite early in the season and that security was important for me. I was lucky to be given the opportunity. What I like most about the team is that they’ve taken big steps in focusing on how the team can get better. They may not have the biggest budget but they really spend it well on the team and what they can offer every rider. I really like the group of people here and the staff are top class.

CN: What style of rider are you?

TF: I was third in Liege-Bastogne-Liege but right now I’m more of an all-rounder. I can do well in the one-day races and on the cobbles because I’m a bit bigger and I have the power. In the stage races I can also climb but going forward I want to focus on the time trials and stage races.

CN: What are your aims for your first season?

TF: I won’t race a Grand Tour in my first year but I’ll do some nice stage races like Valencia and Romandie. I’ll be a helper and I hope to learn a lot but I’ll also have my chance in some smaller races where I hope that I can be a leader. I’m really happy with my programme. I’ve also moved to Girona recently, so this will be my base for the next year. There are a few Norwegians based there too and Wout Van Aert is one of the Jumbo-Visma riders who will be close.