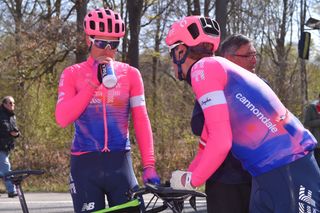 The early season races have put a dent in the pro peloton, with Sebastian Langeveld (EF Pro Cycling) the latest rider out of commission. The Dutch rider suffered a broken collarbone in a crash during Friday's stage of Étoile de Bessèges.

"We are sad to report that Sebastian Langeveld broke his collarbone today at the Étoile de Bessèges after a rider lost control on a descent. We wish the best to Sebastian and his family and we'll see you on the road soon," EF Pro Cycling announced.

Meanwhile, Trek-Segafredo's Matteo Moschetti, winner of two races during the Challenge Mallorca, will need to undergo surgery for a fracture to his hip socket sustained in the crash in France.

Broken bones for Foss and Gallopin in Valencia

"Matteo underwent a procedure under anaesthesia to reduce the dislocation, put the limb in traction and free the joint. Further medical check-ups ruled out further fractures or trauma to other parts of the body," Trek-Segafredo doctor Gaetano Daniele said.

After undergoing CT scans, doctors decided on surgery. "Tomorrow Matteo will be transported to the Humanitas Gavazzeni clinic in Bergamo and on Tuesday he will be operated by Dr. Mario Arduini, a specialist in orthopaedics, traumatology and pelvic surgery. Any assessment of recovery time will be made only after the operation. What is certain, unfortunately, is that it will not be short."

Tony Gallopin (AG2R La Mondiale) was the victim of a crash in the Volta a Comunitat Valencianna on Thursday and underwent surgery for a broken scaphoid bone in his hand on Friday.

According to his team doctor, he will be out of competition for six to eight weeks.