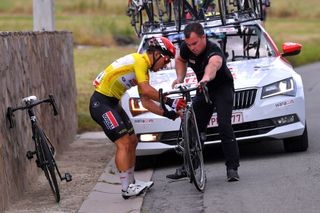 With extra precautions in place for the COVID-19 coronavirus pandemic and the lead-up to Saturday's start of the Tour de France, Lotto Soudal has sent a total of four staff personnel home Thursday due to two "non-negative" PCR test results.

One person in the "team bubble" received a positive test result, while another received a suspect result. Both of these staff members, as well as their roommates, have departed the team and been sent home.

A spokesperson with the team said they hope to be able to replace all four personnel, but nothing has been decided as of yet.

"Safety remains the number one priority and that is why we have not only sent the two staff members home, but also their roommates," the team said in a statement according to Sporza.

"After many months of intensive training, we at Lotto Soudal are still extremely motivated to perform well in this Tour. We hope that the two people involved will recover quickly and that the Tour will reach Paris with only healthy people."

None of the eight riders on the team have been affected by this, and were part of the team presentation in Nice.

The 'team bubble' can have up to 30 total people, consisting of riders and staff. All must be healthy have no symptoms of COVID-19, and must follow protocols of avoiding the public, wearing masks and washing their hands.

The ASO's original protocol calls for any team having two COVID-19 positives to be sent home but recently revised the rules to consider staff members and riders separately.

Lotto Soudal have said it is looking to win multiple stages with sprinter Caleb Ewan, who last year won three Tour de France stages including the prestigious final one in Paris on the Champs-Élysées.