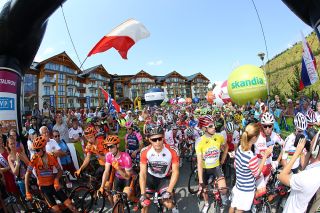 The UCI WorldTour recommenced with the one-day Strade Bianche on August 1, while the Tour de Pologne – running from August 5-9 – is the first WorldTour stage race since professional cycling restarted following its shutdown during the coronavirus pandemic.

As is the case with so many top-level events, which have been forced into a 71-day calendar window between now and early November, the Tour de Pologne has attracted a star-studded start list, which includes overall contenders Jakob Fuglsang (Astana), Wout Poels (Bahrain McLaren), Deceuninck-QuickStep's Remco Evenepoel, Richard Carapaz (Team Ineos) and Simon Yates (Mitchelton-Scott), while Dylan Groenewegen (Jumbo-Visma), Mark Cavendish (Bahrain McLaren) and Fabio Jakobsen (Deceuninck-QuickStep) are among the sprinters who'll be hunting victories on the five-day race's flatter stages.

Cyclingnews will be bringing you reports, results and news for the race. Read on to find out how to watch the Tour de Pologne via live stream, no matter your location, with ExpressVPN.

The race is one of very few events on the calendar to have actually retained its original calendar slot from before the reshuffle due to COVID-19 – although it has been reduced to five days from seven – and is now a key build-up race for riders targeting the quick succession of other important races to come in the late summer, including the Tour de France at the end of August.

Last year's winner, Pavel Sivakov (Team Ineos), will not return to defend his crown, as he was instead racing at this week's Tour d'Occitanie alongside teammates Egan Bernal and Chris Froome. Last year, racing in the jersey of his team's previous backer, Team Sky, Sivakov was able to get the better of Sunweb's Jai Hindley – already a winner this season at the Herald Sun Tour in Australia back in February – and UAE Team Emirates' Diego Ulissi, although just 12 seconds separated the three podium finishers.

Instead, Ineos will be led in Poland by 2019 Giro d'Italia winner Carapaz, who'll wear dossard number 1 in Sivakov's absence. The Ecuadorian will have a strong team behind him, including time trial world champion Rohan Dennis and on-form Irishman Eddie Dunbar.

Read on for all the details of how to watch all the action at the Tour de Pologne this week.

The men's Tour de Pologne race will be aired comprehensively across a number of networks, and will be aired live across Europe, Asia and Australia via Eurosport and on the Eurosport Player.

The GCN Race Pass, available on the GCN app, is also airing the race in the UK and North America. Access will set you back £39.99 for a year, although a special offer currently lets you subscribe for just £19.99.

The race will also be shown on various broadcasters around Europe, including TVP in Poland, Rai Sport in Italy, Sporza in Belgium and EITB in the Basque Country.